diamondlightworld.net
I have been fascinated to watch the virus-like quality of the current meme flooding new age circles which states that the Schuman Resonance is increasing. After receiving and being aware of numerous claims which I intuitively felt were misleading, I did my own research and also contacted a number of reputable sources of real time information on the Schumann Resonances. One was an electrical engineer, Benjamin Lonetree who not only designs equipment for monitoring the SR’s, but has been engaged in monitoring the levels for almost 20 years.
The other was the Heartmath Institute, whose website and charts many are referring to as their ‘proof’ that the resonances are increasing.
The resounding response to the question is ‘No, The Schumann Resonances are NOT Increasing”. No matter how much we would like it be so, or to make it fit the paradigm we would like, it simply is not the case. Repeating something often enough does not make it Truth.  Those that wish to use ‘Science’ as the justification for their position on the increase of SR’s should ensure that they understand the science they are attempting to use.I received the following statement from Annette Deyhle (Phd), the Research Co-ordinator for the Heartmath Institute :

“We have had numerous inquiries regarding postings on Facebook that refer to information on a website suggesting that for the first time in recorded history the Schumann resonance frequency has jumped from 7.8 to 36+ hertz. These statements are inaccurate.  Here are some basics about the source of the Schumann Resonances.

There is an electromagnetic cavity which acts as a waveguide which exists between the surface of the Earth and the inner edge of the ionosphere which is about 55 kilometers (34 miles) from the Earth’s surface. The Schumann Resonances are quasi-standing electromagnetic waves that exist in this cavity. They occur at the following frequencies, which are determined by the size of the earth/ionosphere cavity; 7.8, 14, 20, 26, 33, 39, 45 and 59 Hertz, with a daily (day-night) variation of about +/- 0.5 Hertz (see Figure 1). So long as the properties of Earth’s electromagnetic cavity remains about the same, these frequencies remain the same. The resonant properties of this electromagnetic cavity and the resulting resonant frequencies were first predicted by the German physicist W. O. Schumann in 1952, and were experimentally verified in the late 1950s and early 60s.

There are and always have been 8 different Schumann resonance frequencies. They are the same as they were when first measured in the 1960s. Figure 1 shows most of them, although the highest resonant frequency is not in shown in our data as it is very close to the power line frequency of 60 Hz and is filtered out. If the resonant frequencies were changing it would mean the physical geometry of the Earth-ionosphere cavity was changing. The frequencies can and do change temporarily due to solar storm events, etc. which affects ionosphere shape and conditions, but they return to their base frequencies when things settle down. 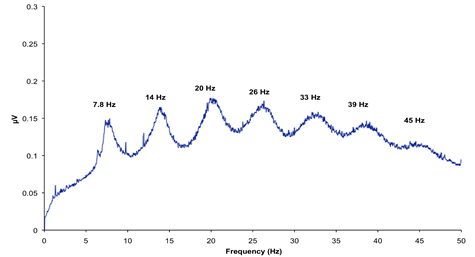 Over many years of monitoring the earth’s magnetic field with the Global Coherence Monitoring System, which uses multiple recording stations strategically located around the earth, we have not observed any evidence for the claim that the frequencies of the Schumann resonances are changing beyond the normal diurnal variation. We also have not seen any evidence reported by other monitoring institutions that there is or has been a fundamental change in the frequency of the Schumann resonances. You can see the live data from the Global Coherence sites at: https://www.heartmath.org/research/global-coherence/gcms-live-data/

This does not mean that other kinds of “frequencies” related to the shift in consciousness are not increasing – but we cannot measure these, at least yet, and they likely have nothing to do with the Schumann Resonances. For those interested in the deeper science of how the Schumann resonances and other magnetic fields created by the Earth and Sun affect human consciousness, you may enjoy reading the e-book titled The Science of Interconnectivity: http://store.heartmath.org/e-Books/science-of-Interconnectivity.html ”

Annette further went on  to say, “We can evolve and our frequency can increase without Schumann Resonances making a crazy jump”. I agree with her.

There is no doubt that the electromagnetic conditions on our planet are changing. The region of space we are in is not the same as it was 50 or even 5 years ago as our solar system spirals through our galactic environment. Our spiritual and physical evolution is being fuelled by solar and cosmic activity and many other energetic influences. We are living within a transitional period between extensive cycles with differing energy signatures and our civilisation is adapting to a new consciousness. Many indigenous traditions have foretold of this time, and we are certainly seeing awakening and expanding awareness of the spiritual bondage we have been held to for many thousands of years.

Yes, things are changing. We are changing. The SR’s spike from time to time and we feel the effects of this,,but the fundamental resonances are not increasing no matter how many channelled lords and masters would wish you to believe it is so.