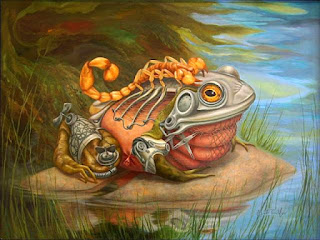 I know what you’re thinking, What’s it going to take to bring in this dang RV? Well you’re in it right now. I don’t mean one of those nonsense reports that has been released from “Reno” where they say, “It’s done.” And then nothing happens. I mean we’re on the edge of the GCR cliff and about to jump.

Here’s what you may or may not know:

Negotiations have continued to try and get the Cabal to conform to contracts that they have signed and agreed to. Each time they do exactly what you’d think they’d do. It reminds me of the story of the Frog and the Scorpion. The Frog agrees to give the Scorpion a ride across the pond as long as the Scorpion doesn’t sting the Frog. When they get right to the end, the Scorpion stings the frog. The Frog says, “But you promised.” And the Scorpion replied, “I’m a Scorpion, that’s what I do.” Obviously the Scorpion is the Cabal. And like you, I have not been able to understand why we would negotiate with people who have enslaved mankind on a mission to execute 90% of the population and enslave the rest, while kidnapping, raping, and molesting our children. That being said it would seem that we’ve reached the point where the new powers that be have drawn the same conclusion.

The Cabal tried to dirty nuke the United Kingdom’s Parliament to stop the Brexit. This was a failed attempt to maintain some kind of control and sovereignty in the world. Meanwhile the good guys witnessed the signoff of the RV. Vice President Pence along with Mnuchin await results as things unfold, but very serious insiders are still reporting that Paul Ryan is the President of the Republic. President Donald Trump is performing a heroic role absorbing all of the crazy attached to disrupting our reality. No one seems to realize that the Immigration ban is really part of GESARA that allows people to return to their country of origin to receive payments that every soul on Earth is entitled to. And honestly, who would believe such a thing when it seems so belligerently ignorant to ban a group of people from a country built by immigrants. The Donald is a champ though, getting the lowest approval rate of any new president in history as he tweets, pushes, and aggravates anyone and everyone he can. He’s the fall guy, no matter how you cut it and he’s expected to step down soon after the RV is finally released. If you’re paying attention to the news and have seen how much they’ve revealed that’s provable and NOT fake news, then you’ll be able to appreciate how close we actually are.


Part of the Scorpion’s role has been to form the Freedom Caucus which is the Israeli attempt to guarantee their defense budget funding by holding up the votes here in the U.S. You’re about to see how all of this is not reactionary but planned. The Two State Solution has been publicly endorsed by Dark Nobility of the Cabal such as Angela Merckel Prime Minister of Germany, and the entire Arab Summit just this week. Finally, with special thanks to General Joe Dunford and “Mad Dog” Mathis, Israel is about to accept the same solution or essentially cease to exist. What generally isn’t mentioned is that there is the Two State Solution, or the One State Solution. And that state would not be Israel. But, to his credit the leader of Palestine did acknowledge Israel as an independent state and agreed to the terms they had previously agreed to from 2002. So willingly or not Israel is on board with the program. If not, Netenyahu is going to be like 2Pac, “Me against the world.”

In the same circuit of necessary events the Health Budget and Tax Reforms should pass simultaneously. The New Tax Code will include Corporate Repatriation that will be the perfect cover for all of us pumping new money into the infrastructure of the American Economy. They’ve planned and foreseen every possible issue and already set up the excuse. These and other drama should be the distraction as two weeks of private redemptions flood the financial system with new money. The back wall for the activation of the RV is end of business on Friday March 31,st 2017. Coincidentally there is a cease fire in the Ukraine that begins on April 1st which would be about 5:00 PM EST on Friday. Remember these events have all been planned to unravel at exactly right time and no matter how it looks it’s going exactly according to plan.

Israel and the Ukraine are the same animal. The last hold outs of the scourge of humanity. That being said they have fought to the end trying to stop the RV when it didn’t serve them, then force it sooner so they could use it to buy their own sovereignty. This week when the Brexit was submitted, you’ll notice the Ukraine settled their Sovereign Bonds. They wanted to RV first so they could pay off their debt and continue to exist the same way, but instead they confessed they needed support from the IMF like air. They must sign the Minsk agreement for Russia to turn the gas back on, and Russia seems confident they’ll do it as they’ve already stated that will happen. That’s the same way the Chinese announced there would be a two state solution in Israel before it has actually happened. In case there was any question about who’s pulling the strings that should give you a clue.

Iraq announced the Hydro Carbon Law had passed on Monday and the formal vote would take place on Tuesday April 4th. That vote can’t take place until there is an internationally recognized fair value for the Iraqi Dinar. As further evidence Prime Minister Abadi asked the United Nations to lift them from Chapter 7, and that can’t be done without a fair value for their currency. These are the pieces we’ve waited for years to finally see publicly and now we’re so jaded we hardly believe they’re even important.

In the banks you can be confident that HSBC controls all of the Paymasters in the U.S. including at Chase, Wells Fargo, Citibank and Bank of America. The rates are showing now on all screens. That’s what we’re being told and looking for it manifest in the form of our exchange here pretty damn quick. Last rates we received were:

Non Disclosure Agreements will only be necessary for Sovereign rates, and as you can see most won’t even think to ask with the rates so high.

The O.G. (Original Grandfather) was in London, Washington D.C. and New York City throughout this week releasing the Markets for Free trade, as well as “the Committee” signing off on the world’s Global Sovereignty, and Tax compliance. The last report I got said the USN was finally live in the system, and the countdown to the big reveal has begun.

China will announce the Gold Standard and the New Rates on Friday April 15th, in perfect alignment with the resurrection. The Messiah was actually crucified on aFriday, and when he gave up the ghost the sun went dark. This is known as the Phenomenal Day. That’s how he was able to be buried for three days and somehow resurrect on a Saturday. You got two days in one on Friday. But how perfect to have a human resurrection just as the planet is resurrecting with Spring from the burial of winter. There will be a two week private redemption period that leads up to the public announcement that should start scheduling appointments literally at any second now.

The expectation is that President Trump will step down because of allegations connecting him to the Russian Hack on the 2016 Presidential elections. It seems Nunes and Comey are with the Republic and holding back until the RV has successfully launched. They’ve clearly been building momentum on this matter, even though Spicer seems to have only one option and that is to deny aggressively. Ryan will be the voice of reason during the storm and receive the accolades for pulling the Nation together with the budget, tax reforms, health care and ultimately the biggest financial boom in history. The 2016 election will be invalidated, and they’ll be a fair election in 2018. I’d suspect that to be done by popular vote as stated in the constitution.

It’s all real and happening. Breathe deeply and expect notification at any moment. You are the frog that hung on long enough, and got big enough to crush the scorpion.