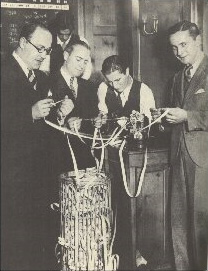 Melt-ups precede a major stock market crash, and by all appearances we may be in a melt-up right now that could cause a stock market crash in 2016. First, a small bit of euphoria kicked up permabull adrenaline in the US market when Brexit didn’t make the American sky fall overnight. At the same time, central banks scurried to buy stocks all over the world just to make sure markets didn’t crash. Then the world’s oldest banks began to topple in Europe, causing European money to flee into American stocks. (These banks had been falling a long time already, but now they started begging for bailouts.)

Then investors who shorted the market got scared to death because the stock market broke a nineteen-month ceiling, which had endured as if it were made of marble. So, the market shorters started to buy the stocks they had committed to now in order to close their positions quickly before the prices went up any higher. That created a massive short squeeze, which happens when a large number of investors who have shorted the market start buying the stocks they’ve committed to. That explodes demand, which drives stock prices up even faster, causing more investors to rapidly run for the exits of their short positions. In a short squeeze, investors accept huge losses in order to close out their bets before they lose even more money.

When Larry Fink, CEO of the world’s largest asset manager, announced Blackrock beat expectations for the second quarter, he summarized this week’s ceiling-breaking market as follows:

According to Fink, the recent rally has been supported by institutional investors covering shorts. “Since Brexit, we’ve seen ETF flows almost at record levels … $18 billion of inflows,” Fink said. What that tells you is retail investors are pulling out, he said. “You’re seeing institutions who were short going into Brexit … all now rushing in to recalibrate their portfolios.” Another curious fund flow: the ongoing rush into dividend plays. Fink said he’s been seeing huge inflows in fixed-income products. “So you’re seeing a risk-off trade, as we call it, around the world.” Fink also confirmed … that the true force behind the recent surge is a familiar one: central banks. Fink said extraordinary central bank asset purchases has been inflating stocks prices. (Zero Hedge)

That $18-billion dollar frenzy has the permabull speculators pawing the ground again and all the algorithms of the electro-speculators charged up and humming. Thus, the market perpetuates an all-out feeding frenzy. Very little of this flurry of buying is based on the economy. It is based on emotions causing actions, which cause more emotions that cause other actions. That’s why a “stock market melt-up” leads to the worst crashes in the history of the world.

What is a melt-up in stocks, and how could it cause a 2016 stock market crash?

A stock market melt-up always ends badly just like a Ponzi scheme. The market over-revs as everyone expects the other players to keep bidding the market up in scuffle to the top, until someone stops to take a breath, looks at the extraordinary height, says “Oh, my …” loses his grip in fear and falls. Suddenly other investors start doing the reverse of what they did before, making large panic moves to get out the way before the others fall. The pyramid that was balancing on its point all begins to crumble.

Lance Roberts, someone whose opinion I respect, reluctantly agrees we could see a market melt up:

“Wave 5, ‘market melt-ups’ are the last bastion of hope for the ‘always bullish.’ Unlike, the previous advances that were backed by improving earnings and economic growth, the final wave is pure emotion and speculation based on ‘hopes’ of a quick fundamental recovery to justify market overvaluations. Such environments have always had rather disastrous endings and this time, will likely be no different.”

…Short-term traders can make immediate profits using momentum techniques, following the herd, and picking up pennies in front of a steamroller. Remember your brother-in-law who was getting rich day trading stocks in 1999? Remember your cousin who was getting rich flipping houses in 2005? … There are always profits to be made for awhile. Then the bottom drops out, because fundamentals, cash flow, valuations, and reality matter in the long run.

This year I’ve read a number of analysts saying the stock market is not about to crash because the all-out euphoria that drives a market far above economic reality just before a major crash (the kind of crash that can wipe out 50-60% of the market’s total value) isn’t happening. Well, this may be it. We’ve had little bursts of euphoria, but this could be the Big One — the final roundup of the bulls. Central Banks with their know-all policies for crowding the market upward may have just herded the bulls all into the corral for slaughter.

Economic collapses and stock market crashes are not synonymous

When I predicted the economy would now go into the second leg of the Epocalypse, that doesn’t have to mean the US stock market will crash in 2016. My latest article on the developing Epocalypse did not predict another market plunge like we saw in January. (I count January as a crash of sorts in that it was the worst start of any year in the New York Stock Exchange’s history — so that’s a significant landmark at the start of a year of great economic decline around the world — but it was not followed by the pattern of stock market rallies and drops that I said I expected.)

Many people think of stock markets and the economies they are based in as synonymous because people are accustomed to gauging the economy by how the market is doing. So, when you say, “the economy is going to collapse,” they think stock market crash. So, just to be clear, that’s not what I’ve said will now happen.

Usually stock markets and their national economies do track together. However, most stock markets of late have not tracked their national economies for a long time, especially in the US. The US stock market has even run contrary to the US economy much of the time. It has tracked the Federal Reserve because speculators followed the money — the big money, the infinite money that can be created at will. But that only means the market has almost no economic support. It’s rising on hot air.

The Fed created money to be poured into the stock market (“front-running the market,” as Richard Fisher, one of the Fed’s board members said). If the economic news was bad, speculators drove the market up because a bad economy meant meant a shipload of new money from the Fed was on the way. The Wells Fargo wagon was coming!

The Epocalypse is an economic catastrophe that is unfolding in months that will get worse and worse. I noted in my last article about the Epocalypse that stocks were falling (particularly in Europe and particularly banking stocks) because crashing stock markets typically create economic catastrophe all by themselves, particularly if they focus on the banking industry as in 1929 and 2008 because then stocks and banks fail at the same time in a one-two, knock-out punch.

Even here, I’m not predicting a stock market crash for 2016. All the economies of the world are going down whether the US stock market crashes or not. In fact, I’m sure the US will be the last to fall. I’m pointing out that it appears the bulls may be making their final stampede at last. If the current market rally is an emotional melt-up — as it appears to me — then a massive US stock market crash in not far off because melt-ups are just emotional eruptions with almost nothing for support in the economy that should be the market’s foundation. Without support, the floor of the once-swelling caldera collapses into the receding magma chamber beneath.

In buying up stocks to “save us all from Brexit,” central banks may have unintentionally cued up the next big stock market crash by triggering a feeding frenzy. A person can make big money on the ramp up (as Lance Roberts and Quinn note), as many do, but it’s a dangerous gamble because you never know at what point investors will think too many jinga pieces have been removed and start to panic.

One reason I cannot predict a stock market crash for 2016 is that central banks can create infinite amounts of money. Now that fronting money for the market has practically become their standard play, who knows to what extent they will buy up the slack through their member banks, should investors start to flee, by creating fiat money in the reserve accounts of those banks (QE4)?

Janet Yellen certainly doesn’t want Trump to win the election now that he’s said job one is to fire her. Therefore, the Fed will pump any amount of steroids into the market by any vein it can find in order to keep Trump from proving right about a failing economy. They know that a falling market will be seen as proof of a failing economy by most people and that a falling market can create a failing economy. A fourth round of quantitative easing wouldn’t likely have an affect that would last long, but it could get enough lift for a couple of months to carry us through the election cycle. Federal Reserve board members are also now talking openly about “helicopter money.”

I’m not sure the Fed can save the market if it has already created a melt-up, but there is no way of knowing how much money the central banks will create or where they’ll invest it. Such a major unknowable can scuttle any prediction. 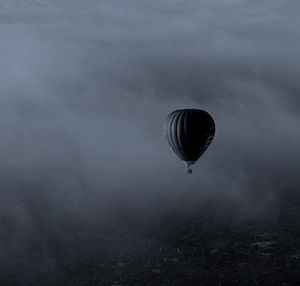 We do know from observation, though, that the more the Fed does to centrally manipulate the economy through the stock market and bond markets, the worse mess it makes of the economy overall. Honest price discovery, as David Stockman is always pointing out, has been blown to pieces for so long that no one knows what the real value of anything is because values throughout all markets have been carried aloft for years by the Fed’s hot-air of rapidly rising money supply. It’s a hot-air balloon ride into the unknown. The balloon is rising faster right now, but the flame that is lifting it may be its own burning fabric at the bottom, and that could become a melt-up of the whole balloon.