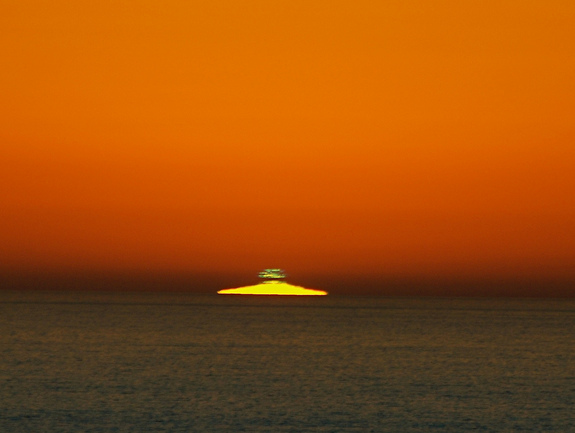 Is it ignorance or apathy?  Hey, I don’t know and I don’t care.  — Jimmy Buffett

A “green flash” at sunset is an optical phenomena that sometimes occurs when atmospheric conditions are just right, a green spot is visible above the upper rim of the disk of the sun.

Green flashes occur because the atmosphere can cause the light from the sun to separate out into different colors.  Thus, a green flash usually only lasts for no more than a second or two.

Harvesting sovereign rates during the RV is like waiting for and seeing a green flash at sunset.  It’s very rare, but very real for paying close attention… otherwise you’ll miss it entirely.

The RV event, however, is a more permanent transition of the monetary system from a fiat to gold value benchmark; thus, anyone with first basket currency can participate within a two year redemption window after the public reveal of these said rate changes occur.

This is why as Americans we should pay very close attention to the RV, and why some in the know have for years.  A group of us even keep a 24/7/365 vigil to guarantee that the currency public does not miss the sovereign rate “green flash.”

You see, our once glorious nation was long ago overtaken by a determined and treacherous enemy intent on raping and pillaging everything we hold dear, including 100% of our natural resource wealth.  Don’t even get me started on the intentional moral implications of transgender bathrooms.

Most to all Americans are simply unaware of this silent coups d’etat.  But enough White Hat Republic restoration forces in the military, government, banking and civilian sectors have bonded together to request and get the necessary help to reverse the tide.

What’s tragic is not only do most Americans not know about this 145 year attempted theft of their own country, they wouldn’t care if told, or worse, they wouldn’t believe any of this “nonsense” is even true at all.  Sadly, they would an do persecute such opinions and go to great lengths to find arguments disputing actual historical facts.

Yes, history is written by the winners, but it’s studied by even fewer including those of holding their tin cups out waiting to “get paid” by the RV.  They all want the blessings but assume none of emotional or intellectual burdens of discovering why an RV in and for the USA is even necessary.

News flash: It doesn’t work that way people.  There is no short cut to enlightenment, no cliffnotes to wisdom.

Americans have developed historical ADHD when it comes to defending their own country.  Sure they will go to war and fight heroic battles on foreign soils, but yet they do nothing while the real enemy sits right here in their home State Legislatures, Governor’s Mansions, House of Representatives, Senate, Supreme Court and White House perches of power.

A true and formidable enemy quietly replaced our entire form of Republic government without firing a single shot via the “Act of 1871.”  Few Americans knew, fewer Americans cared.

Then they took our ability to print our money in 1913 with the Federal Reserve Act.  Even fewer knew, even less cared.

Then they took our nation off the gold standard in 1971 for a temporary period that they planned on never returning.  Again, no public outrage.  No political  dissent.  No fight.  And our current economic state of catastrophe was sealed.

All of this equates into pure American apathy, which we all are guilty of, myself included.  Well no more.

That’s why I’ve been screaming from the top of my blogging lungs about the financial “green flash” known as sovereign rates because a) they exist despite the small minded claims of uniformed dissenters (ZIM 21,000+ is a real sovereign rate on back screens as of Sunday midnight on multiple bank screens worldwide); and b) it’s your civic duty as an alert and patriotic American citizen to get as much as you can–for as many as you can–and disburse for as long as you can–prudently, generously and philanthropically.

This is the whole point of the RV–to restore our Republic collectively, not individually gain unprecedented wealth.

So not only are ZIM holders tasked with figuring how and when to get these higher sovereign rates, but also in the restoring, repairing and replacing of tattered social and physical infrastructure right here in our beloved Republic.

Yet as Chosen Ones, we have been divinely positioned to both hydrate and educate our family, our community, our cities, our country and our continents financially and intellectually.

And only Chosen Ones can heal all that is broken with America and the planet, as well as eliminate all future threats to our Republic and human species at a grass roots/street level.

So what say you?  Are with God or against Him?  Because when you redeem, especially those redeeming at higher sovereign rates, the only question you should be asking yourself is this: Am I part of new solutions or just perpetuating the same old problems?

WW3 has already broken out (9/11/01), been fought and won in your behalf.  Did you even notice let alone participate?

Whatever, the job at hand now is to clean up the mess left behind by several uneducated and apathetic generations of Americans.  This is a harsh but very real truth about where our nation rests today circa November 2016.

That said, our future is glorious and soon to be dynamic again with a fresh new debt-free economy and gold backed currency thanks to some noble global collateral account sovereign soul’s.  And it all begins for us at midnight (CST) Tuesday, November 1, 2016.

We thought we might see the “green flash” come midnight on Saturday, but what’s a few more days made to wait between old friends.  I needed to mow the lawn and do some grocery shopping anyway.

The RV release also means that our Constitutional form of government has been restored and the Republic of the United States again exists as it was originally intended by our nations forefathers.  Hallelujah!   Thank you Chinese Elders!   We are both humbled and honored by your abundant gift and renewed trust in America!

We have been told that by noon Monday all accessible will be given to new system accounts and thus released fir free and clear usage at any amount–globally–including T1, T2, T3 & T4 transactions which yes will also include those sovereign rate exchanges… specifically the ZIM.

Given the volume of new capital, the Chinese Elders felt a very tight rein had to be kept on final US access until they could guarantee we would not repeat recent history (wise to spend some time studying how and why the Elders bailed out the world financial system once before via a similar gold collateralization circa 1944 at the Bretton Woods Conference).

By all means, enjoy your green flash RV event today, but remember, if you hold ZIM, you also bear a greater responsibility never to let this kind of madness overtake our restored Republic and the human race ever again.  So rise up to meet your soul’s destiny during your redemption appointment … and of course be fearless in reclaiming your great nation’s sovereignty.