Five former presidents of the United States came together for a hurricane relief benefit, and their photo-op with musician Lady Gaga led to a surprising reaction—the Internet loved it! Not only did the public put politics aside, it also seems to have forgotten about all of the things these men have done to give them a very different title: War Criminal.

“Nothing more beautiful than everyone putting their differences aside to help humanity in the face of catastrophe. #OneAmericaAppeal,” Gaga wrote on Twitter. 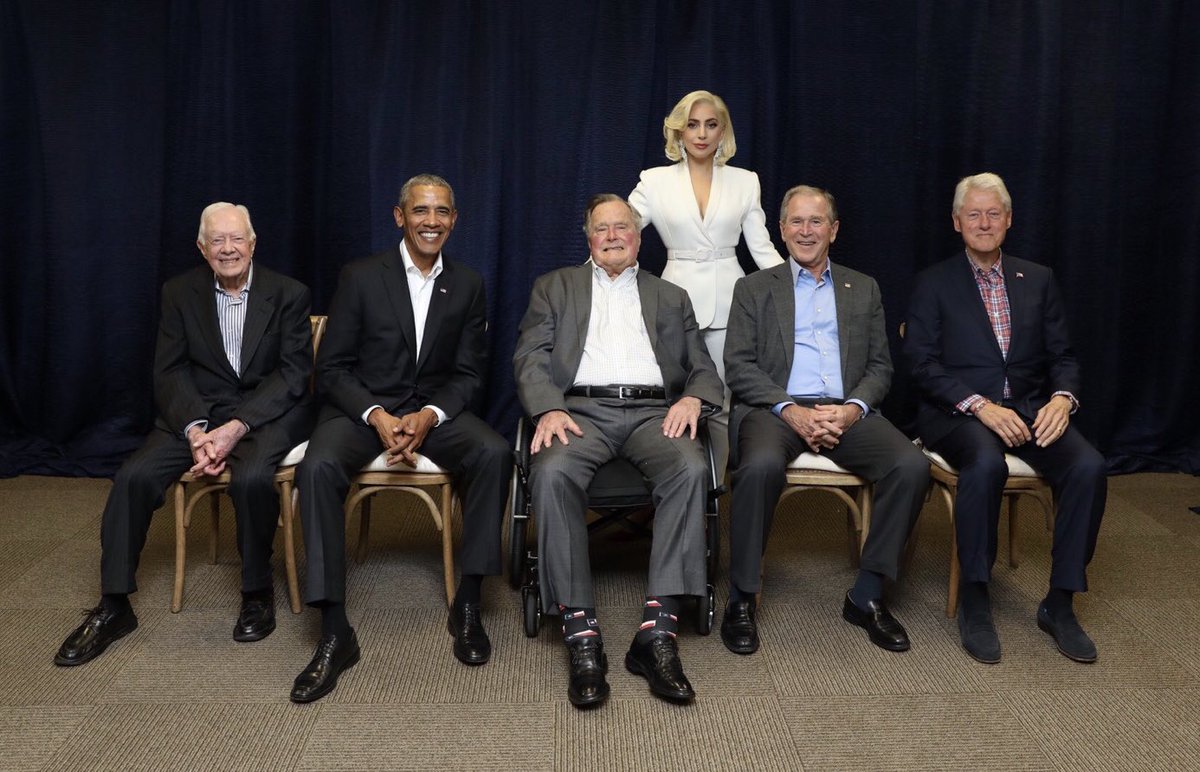 Here are a few of the highlights from each presidency:

After the CIA-sponsored assassination of the first democratically-elected prime minister of Congo in 1961, the brand new Carter administration stepped aside and said nothing as its allies provided the country’s new puppet dictator with military equipment to crush a dissenting movement that broke out in 1977.


Guatemala was also dealing with the effects of U.S. military intervention in 1977, and the horrific conditions included the presence of military death squads that tortured innocent civilians. While Carter claimed to cut off aid to the military government, some reports have argued that this was “little more than a PR stunt while tangible support continued.”

When the South African Defense Forces dropped bombs on innocent civilians in Cassinga, Angola, in 1978, more than 600 Namibians in sovereign Angolan territory were murdered as a result. Carter defended the apartheid government before the UN Security Council to ensure that it would not face sanctions.

Before the Carter Administration was dealing with the aftermath of CIA-sponsored intervention around the world, George H. W. Bush was serving as the Director of Central Intelligence beginning in 1976. His term lasted for just 355 days.

Bush then went on to become president in 1989, and he launched Operation Desert Storm in 1990. The argument was that Iraq had amassed 250,000 troops and 1,500 tanks on the border with Saudi Arabia, according to “top-secret satellite images.”

However, St. Petersburg Times journalist Jean Heller reported that according to “two commercial Soviet satellite images of the same area, taken at the same time, no Iraqi troops were visible near the Saudi border—just empty desert.” This means that the first Bush Administration convinced the public that it should invade a sovereign nation based on claims that it was threatening a U.S. ally—but there is no proof that those claims were true.

When Clinton took office in 1993, the U.S. continued its war with Iraq through sanctions. While numbers from the United Nations suggested that thousands of children were dying each month because of the sanctions, Clinton defended his administration’s actions, and blamed Saddam Hussein.
In addition to denying humanitarian aid to the country, Clinton bombed Iraq in 1998. He sought no approval from Congress, and it was argued that he used the bombing to distract from his impeachment proceedings.

Clinton also bombed Afghanistan and Sudan in 1998, launching dozens of cruise missiles and claiming it was “an act of self-defense against imminent terrorist plots.” He insisted that the targeted area in Sudan was producing chemical weapons and had ties to Osama bin Laden, but no evidence of that was ever produced.

The propaganda against both Saddam Hussein and Osama bin Laden reached new heights when the second Bush took office. Before the death toll from the 9/11 attacks was confirmed, the Bush Administration had announced, and the mainstream media had spread the claim far and wide, that bin Laden and al-Qaeda were to blame.

Bush is credited with officially starting the “War on Terror,” which led to the illegal invasions of Afghanistan in 2001 and Iraq in 2003. In addition to killing hundreds of thousands of innocent civilians over the years, U.S. military intervention in Iraq and Afghanistan is still ongoing today, and it shows no signs of slowing down.

Despite running on a platform of peace, and even winning the Nobel Peace Prize in 2009, Barack Obama has a record of spending more time at war than any other U.S. president. His administration fueled the wars in Iraq and Afghanistan, and created new conflicts in Syria by arming so-called “moderate rebels,” and then dealing with the consequences.

Now, as Donald Trump’s first year in office come to an end, it is clear that he is only continuing the battles that were started and prolonged by his predecessors—and the first 9 months of his administration have already resulted in a horrific number of civilian causalities.

Rachel Blevins is a Texas-based journalist who aspires to break the left/right paradigm in media and politics by pursuing truth and questioning existing narratives. Follow Rachel on Facebook, Twitter and YouTube. This article first appeared at The Free Thought Project.