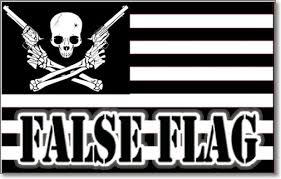 Despite the attempt to marginalize the concept, “false flags” are so common that U.S. officials frequently use that phrase.

A technique known as “false flag,” or deceiving a detainee into believing he is being interrogated by someone from another country.

In another document taken from the NSA by Snowden and obtained by NBC News, a JTRIG official said the unit’s mission included computer network attacks, disruption, “Active Covert Internet Operations,” and “Covert Technical Operations.” Among the methods listed in the document were jamming phones, computers and email accounts and masquerading as an enemy in a “false flag” operation. The same document said GCHQ was increasing its emphasis on using cyber tools to attack adversaries.

Washington’s Blog asked high-level NSA official Bill Binney* if he had heard of the term “false flags” when he was with the NSA.

Sure, they were under deception and manipulation programs.  I was not involved in doing them; but, I did have to figure out some that the other side was doing.  The other side called them “dezsinformatsiya” and Manipulatsiya.”

The Brits have been doing this for several hundred years and are quite good at it.

Washington’s Blog asked Philip Giraldi – a former counter-terrorism specialist and military intelligence officer with the CIA – the same question with regards to his experience with the CIA.
Giraldi responded:


Yes, of course. We did false flags, and called them that, frequently in the operations directorate using false documentation to indicated that we were nationals of a country that was not the United States. Almost every CIA officer had false third country identification when operating overseas….

We followed up by asking:

Is it fair to say some of the false flags were for the purpose (i.e. premeditated) of blaming another country or group … not only just in case caught?

Most terrorists are false flag terrorists or are created by our own security services.
***
In the United States, every single terrorist incident we have had has been a false flag, or has been an informant pushed on by the FBI.

Steele has repeatedly and publicly said (and also confirmed to Washington’s Blog) that he personally carried out a “false flag” attack while working as a U.S. intelligence officer.

Indeed, false flags are so common that there are official rules of engagement prohibiting false flags in naval, air and land warfare.

* William Binney is the highest-level NSA whistleblower in history. Binney is the NSA executive who created the agency’s mass surveillance program for digital information, who served as the senior technical director within the agency, who managed six thousand NSA employees, the 36-year NSA veteran widely regarded as a “legend” within the agency and the NSA’s best-ever analyst and code-breaker, who mapped out the Soviet command-and-control structure before anyone else knew how, and so predicted Soviet invasions before they happened (“in the 1970s, he decrypted the Soviet Union’s command system, which provided the US and its allies with real-time surveillance of all Soviet troop movements and Russian atomic weapons”).

Videos
Examples of False Flags mentioned by senior US officials