Hey everyone, hope you are all doing well. I have a few things I want to include in this post which I hope you will all find most interesting as I definitely did.

A little while back there was a short trailer that was released for a new show on TBS which would be titled ‘People of Earth’ which included characters discussing their UFO abduction experiences. The show is a comedy, which, in my opinion, is a prudent choice of style for a television show for an un-awakened audience. I have written about this way of releasing information and intel in my article Many a Truth is Said in Jest where various mainstream news sources joked about teleportation being real and how the moon landings were faked.

The show features reptilian beings, Greys and the tall Nordics (you might notice the Nordic ET character speaks with a Nordic accent). It appears that the encounters are of a semi-negative nature as the people are experimented on board the ET’s ship and then given screen memories (fake memories) so they don’t remember any true events that took place.

The first episode is free on YouTube. I know a lot of you were probably looking forward to this show and it is quite funny and with lots of information in it. There will be a 2 episode première this week I believe and it will be aired on TBS.

Here is a preview in case you’d like to see this first before watching the first episode:

Then we have 2 interviews with James Gilliland from this last week. For those of you who don’t know him, here is a bio:

“James Gilliland is a minister, counselor, an internationally known lecturer, best selling author with the books, Reunion with Source, Becoming Gods, and The Ultimate Soul Journey. James appeared in Contact Has Begun, His Story, The History Channel, UFOs then and Now, UFO Hotspots, ABC, Fox News, BBC Danny Dyer Special, Paranormal State, ECETI Ranch a Documentary, and the new movie Thrive have all featured James and ECETI which he is the founder. He has appeared on Coast to Coast, Jeff Rense, and to numerous other radio shows to mention also being the host of, As You Wish Talk Radio, www.bbsradio.com and Contact Has Begun, www.worldpuja.net. He is a facilitator of many Eastern disciplines, a visionary dedicated to the awakening and healing of Humanity and the Earth and teaches higher dimensional realities from experience.”

His information is always uplifting and positive and I really enjoy listening to him as he has a very rational perspective about everything. In the interviews he discusses the elections, disclosure, the financial system and the coming Earth changes:

Then we have the much-awaited public release of a documentary created by Nassim Haramien which is narrated by Patrick Stewart. I haven’t watched it yet but the preview looked totally amazing and it was just released for public viewing a couple days ago as of the time of this writing.

And here is the link to preview it on Vimeo.com.

Then i’d like to share an article that came out on Dr. Michael Salla’s blog Exopolitics.orgwhere he presented leaked documents about a salvage plan that the Cabal would attempt to implement if the elections went to total , which they obviously have. The Cabal would use advanced bluebeam technology to stage an alien invasion to postpone the elections and do who-knows what else afterwards. Cobra has shared with us in previous interviews that the Alliance/Resistance Movement knows about this technology and they will not allow the Cabal to use it the way they want to:

Then we have more e-mails from Wikileaks being released about Disclosure and Zero-Point (free energy) information exchanges between Astronaut Dr. Edgar Mitchell and John Podesta. These are e-mails that are newly released and not the ones you have seen in the media yet: 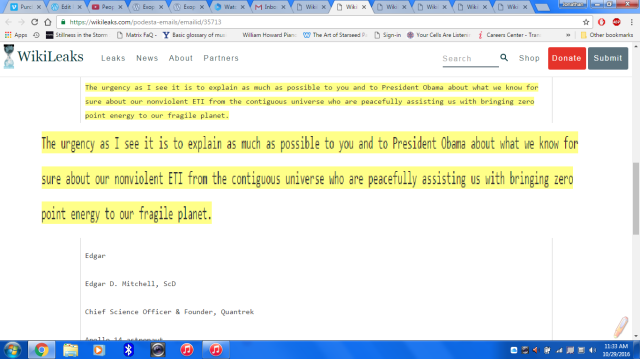 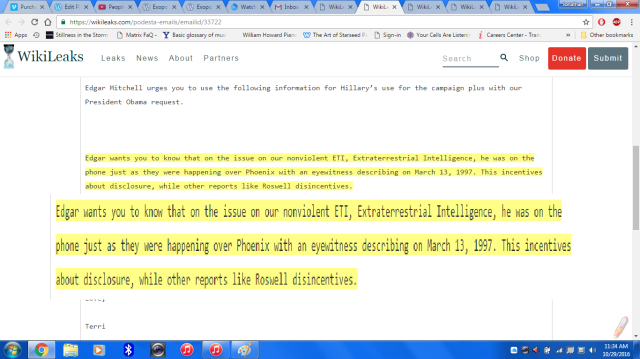 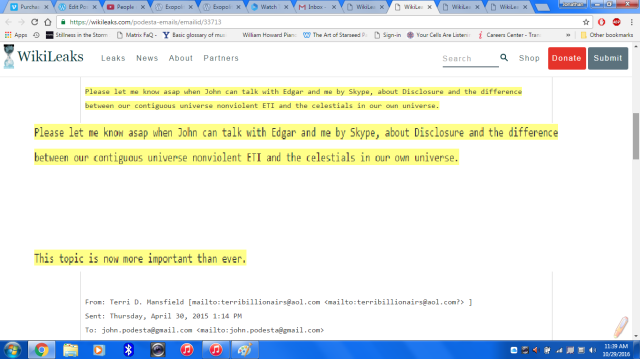 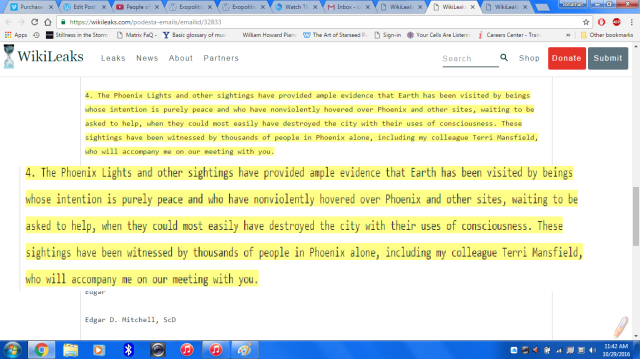 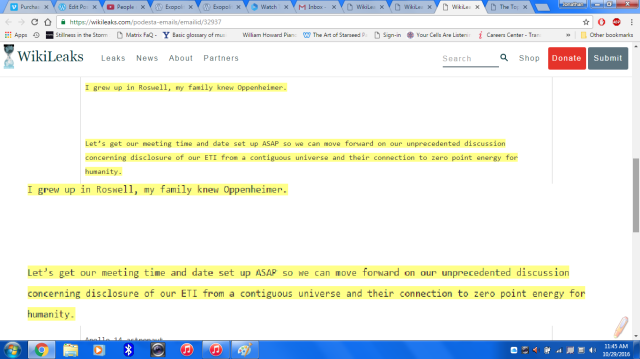 After reading the line “I grew up in Roswell, my family knew Oppenheimer”, I decided to do a little more research on this. I didn’t have to look very hard and found the following from Ancient-Code.com:

“There is a top-secret (now unclassified) document written by Robert Oppenheimer, an American theoretical physicist, and Albert Einstein, a German theoretical physicist who wrote a report about the “Relationship with Inhabitants of Celestial Bodies”. This enigmatic six-page document is one of the first to make reference to Extraterrestrial Biological Entities and states that the presence of UFOs is something accepted by the military for a long time.”

You can download the June 1947 document from Ancient-Code here.

As you can see there are some amazing things coming out in these e-mails and one could spend hours research their content. I will definitely be doing more of that. What’s more is that there is now proof that there are very high-level people who want this information known to the public and have wanted this for a very long time. It appears that they are going to get to do this and give humanity the gift of the freedom of knowing and meeting their celestial families.

This is all I have for now, thanks for reading everyone and much love as always!