An intensely worded new Ministry of Foreign Affairs (MoFA) report circulating in the Kremlin today states that as Foreign Minister Lavrov has affirmed that Russian-American military communication links are remaining open, and his counterpart US Secretary of State Mike Pompeohas said “the world is watching”—the Ministry of Defense (MoD) has issued a global warning declaring that the massively assembled Russian naval and air forces in the Mediterranean Sea off the coast of Syria are in full combat readiness and advise: “In the interests of ensuring the safety of shipping and air traffic and in line with international law, the areas of the exercise will be declared dangerous for shipping and flights”. [Note: Some words and/or phrases appearing in quotes in this report are English language approximations of Russian words/phrases having no exact counterpart.] 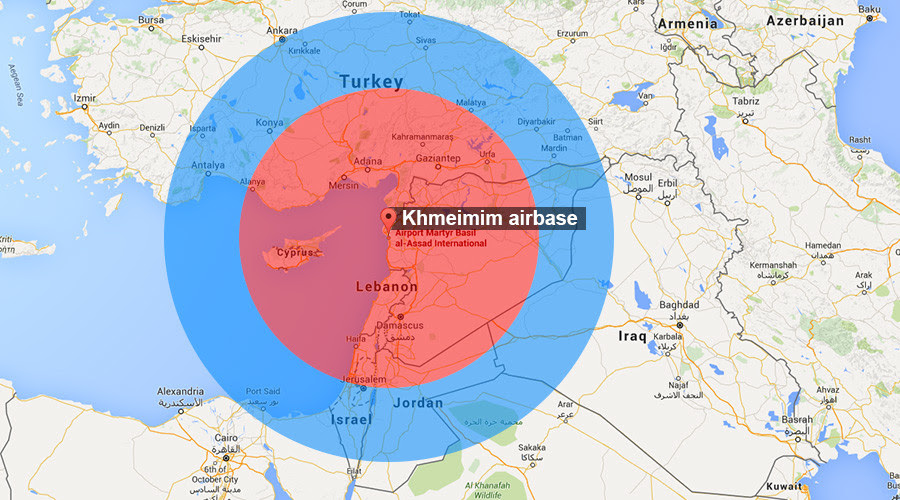 According to this report, what is commonly refered to in the West as the Syrian Civil War has been an ongoing conflict, since 2011, started by the US-EU on behalf of their Sunni Muslim puppet states of Saudi Arabia and the Gulf Monarchies who were seeking to gain pipeline access through Syria to Europe through which they could sell their oil and natural gas—but was opposed by the Shiite Muslim nations of Iran and Iraq, and the Sunni-Shiite-Christian nation of Syria who were preparing to build their own oil and natural gas pipeline network to Europe—thus making the true name for this conflict The Oil-Gas War Over Syria. 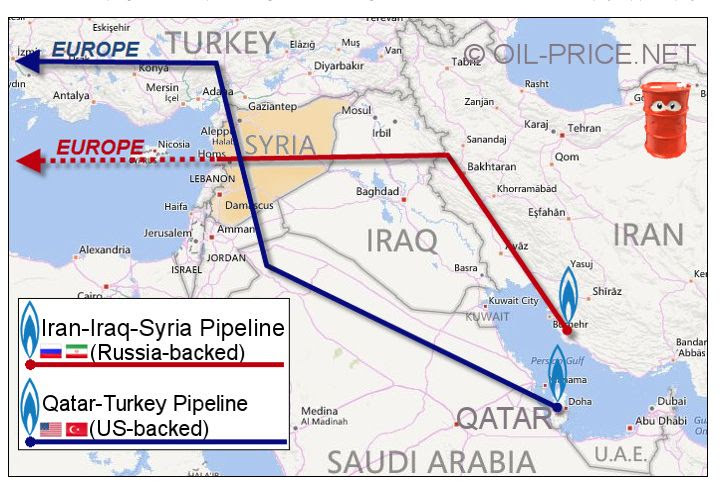 Knowing that neither the American or European peoples would ever accept the estimated military losses of, at least, 250,000 war casualties of their sons, daughters, fathers and mothers in order to win a war against Syria, this report details, the Obama-Clinton Regime, instead, devised a plan to prosecute this war using US-EU-Saudi Arabia-Qatar monies to bankroll a barbaric Islamic radical terrorist army that has come to be known as the Islamic State of Iraq and the Levant (ISIL/ISIS/IS/Daesh)—all of whose terrorist fighters were gathered from around the entire world, and whose former allegiance was to the radical terrorist organization known as Al-Qaeda.

By 2013, however, this report continues, the Obama-Clinton Regime realized that their Syria takeover plan was a failure, thus causing them to change to a strategy best called “create quagmires until we get what we want”—and against which, by September 2015, saw Russia saying “enough is enough”, and who since then have sent over 63,000 combat troops to Syria, has seen Russian air forces flying 39,000 sorties destroying 121,466 terrorist targets, and who combined have killed more than 86,000 of these US-EU backed and funded Islamic barbarian terrorists. 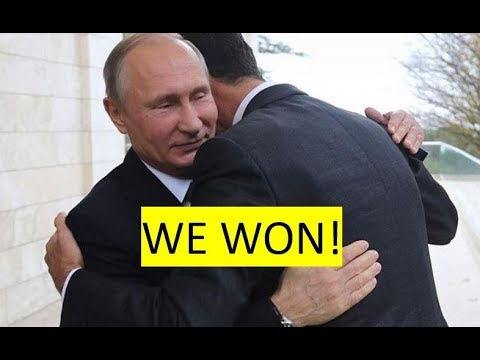 In order to minimize needless civilian suffering and death in Syria, this report details, last October (2017) the Republic of Turkey agreed to take and maintain control of Syria’s Idlib Governorate (Province)—that provided the atmosphere for the MoD to reach 2,518 reconciliation agreements with Syrian settlements to end their fighting—and allowed over 600,000 Syrian refugees to return to their homes—as radical Islamic terrorist fighters had left these war torn regions when faced with certain death, with their, instead, choosing to surrender their arms in return for their safe passage to Idlib under Turkish control.

Once having been safely transported to Idlib Province, however, this report grimly notes, these radical Islamic terrorists began an unrelenting campaign of violence, the vilest being their kidnap, ransoming, torturing, raping, and suffocating a 9 year old Syrian girl who was visiting her grandparents—with it further being discovered that these Islamic terrorists were being re-armed with American made weapons whose fighters, also, are being trained by the US to commit more terror attacks and Syria—with others of these Islamic terrorists being flown by the Americansfrom Syria to Afghanistan—and whose “new” terror organization they are fighting for being Hayat Tahrir al-Sham—whose translation means “Organization for the Liberation of the Levant” or “Levant Liberation Committee”, more commonly referred to as Tahrir al-Sham and abbreviated HTS, but is more properly known as Al-Qaeda in Syria—who were funded by the CIA—and whom the MoD reports the British military contracting company Olive is now working with in preparing to commit a “false flag” chemical attack in order to provoke a new US-EUattack on Syria. 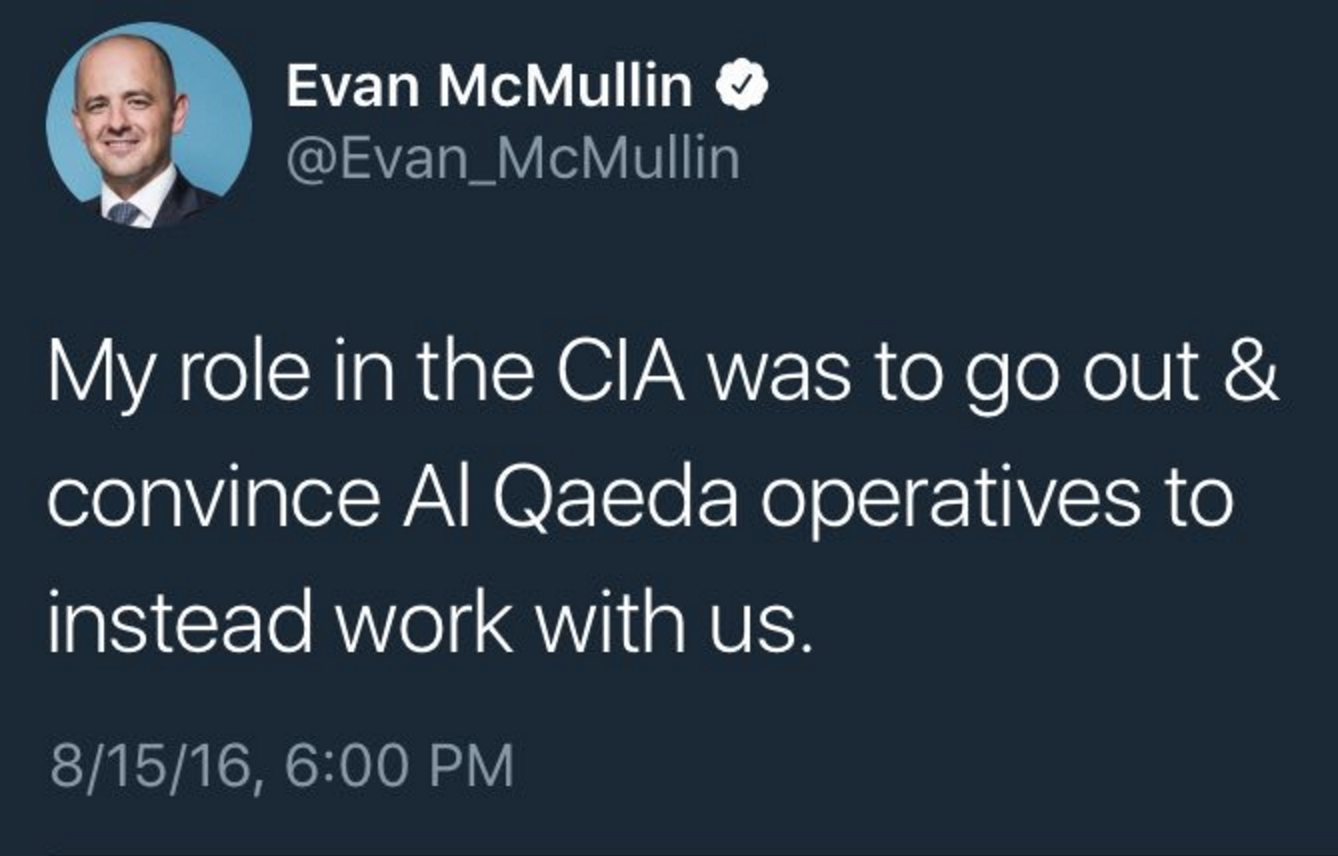 With Foreign Minister Lavrov declaring that this “terror abscess” in Syria’s Idlib Province must be destroyed, this report continues, Jaber Ali Basha, the General Commander of Hayat Tahrir al-Sham terror forces in Idlib, just hours ago, issued a warning that his terrorists are undergoing massive preparations for any attack against them, with his pointing out that Idlib would not be like the rest of the Syrian areas—and whose terror forces have just begun blowing up bridges to thwart the planned military offensive they know is soon coming.

Most to be feared by Commander Ali Basha and his US-EU backed terror forces, though, this report details, is that Turkey failed to buckle under American pressure and, on Friday, officially designated Hayat Tahrir al-Sham as a “terrorist organization”—thus setting the stage for what the Western propaganda media is now declaring “will be a battle like no other” and their warning that “babies are in the firing line”, too.

As the British propaganda media is further shamelessly declaring that Russia is “softening up the West as it prepares for a bloodbath in Idlib Province”, this report concludes, their government, at least, appears to be accepting the reality that the world will no longer support their funding of terrorists—as exampled by the British government just cutting off its funding scheme supporting the Syrian opposition—and that follows President Trump, likewise, ending his nations funding of reconstruction of areas in Syria under US control that doesn’t belong to them in the first place—but all of whose events, nevertheless, now sees the entire world holding its breath to see if the West will choose a Russian-Syrian military offensive to destroy these barbaric Islamic terrorists once and for all—or its alternative, otherwise known as World War III. 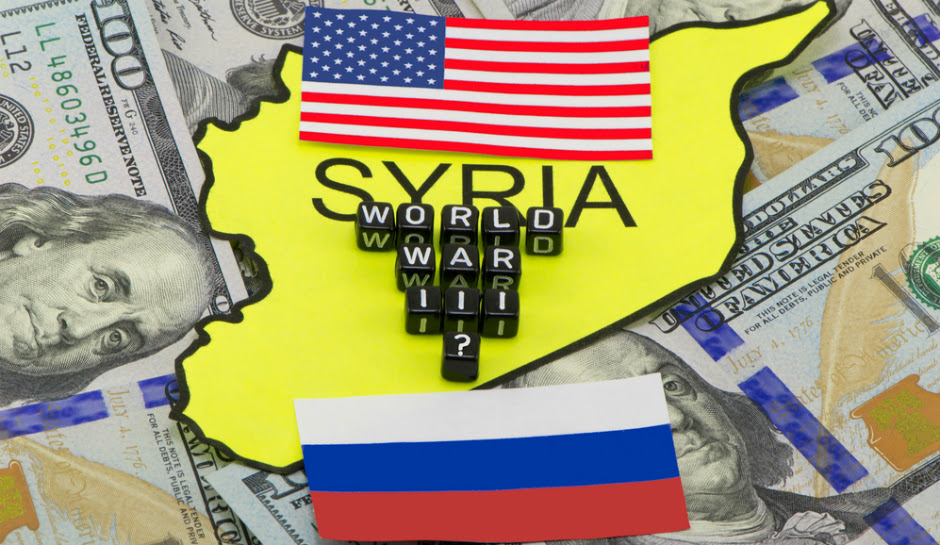 September 2, 2018 © EU and US all rights reserved. Permission to use this report in its entirety is granted under the condition it is linked back to its original source at WhatDoesItMean.Com. Freebase content licensed under CC-BY and GFDL.