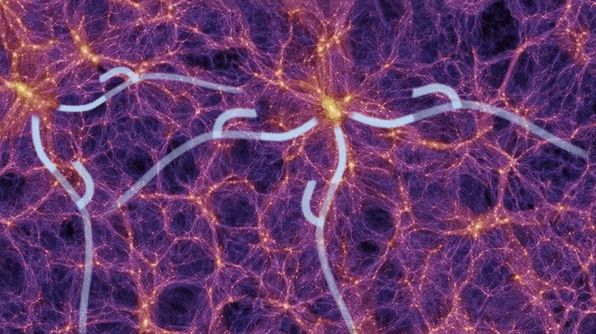 Astronomers for the first time discovered peculiar waves traveling along the threads of the “web of the Universe” – a gigantic network of threads of dark and visible matter that unites all clusters of galaxies and clouds of intergalactic gas, according to an article published in the journal Science.
“The discovery of these waves is so interesting to us for the reason that in these oscillations information about how the Universe was heated up in the first few billion years after the Big Bang is hidden,” says Joseph Hennawi of the University of California at Santa Barbara (USA).

Ray in the Dark Universe

It is believed that the universe in its structure is similar to a giant three-dimensional web. Its threads are clusters of dark matter, the so-called filaments. At their intersection points are dense clumps of visible matter – individual galaxies and groups of star metropolises.

In July 2012, astrophysicists discovered one of these cobwebs connecting the galaxies Abell 222 and Abell 223, due to distortions in the light of the distant stars that dark matter evoked. Subsequently, “Hubble” received three-dimensional images of such “umbilicals”, studying galaxies in the cluster MACSJ0717 in the constellation Auriga, and this year the scientists received pictures of several hundred similar threads and calculated their typical mass and other properties.


Hennawi and his colleagues saw for the first time how these threads “swing” under the action of peculiar waves that go through them from one cluster of galaxies to others, solving the cosmic analogue of the problem with the search for a needle in an endless haystack.

As the astronomer explains, today most scientists assume that the “cosmic web” does not stand still, but fluctuates under the influence of waves that produced the first galaxies and stars in the “dark ages” of the universe. Under this term, scientists understand one of the first periods of her life, when the universe was filled with neutral hydrogen and helium, opaque to light. In other words, we will never see the universe of that time.

When the first bright stars and supermassive black holes appeared, the molecules of this gas were sharply torn to pieces and ionized, which gave rise to a series of powerful oscillations that traveled through the first galaxies and the space between them. According to Hennawi and his colleagues, traces of these waves could be preserved inside the “web”.
Light bulb for “web”

The problem is that the gas in these filaments does not shine, and it can be detected only if it is illuminated by the powerful radiation of some other object, for example, the quasar, the active nucleus of a supermassive black hole in the center of a distant galaxy located behind a filament .

If we find two quasars located close to each other, then the differences in the spectrum of their radiation will give out whether the gas that is radiating their rays on the way to the Earth is moving or not, and whether there are waves in it that cause the matter of “filaments” to shrink or stretch.
“Searching for pairs of quasars is no different from looking for a needle in a haystack, we had to sift through several billion photos of objects that are a million times fainter than our eyes can see in order to find at least two pairs of suitable quasars,” the scientist continues. .

Having discovered these fluctuations, the scientists had to spend a lot of extra time in order to understand what they actually are. To this end, Hennawi and his colleagues created a computer mini universe with its “web” and attempted to reproduce the differences in the spectrum of quasars that they recorded in the real world using the Keck telescopes in Hawaii and the Magellan in Chile.
As these calculations showed, the presence of waves in the “web of the universe” suggests that its matter became completely transparent quite late, about 12.9 billion years ago, 800 million years after the Big Bang. This conclusion coincides with the current cosmological theories, and further observations of such fluctuations, as the authors hope, will help us to reveal other details of the “enlightenment” of the Universe.