THE JERICHO MOMENT — Crumbling the Walls of Our Prison Planet
by GW Hardin
Our planet is at its most critical moment. Throughout history we have become imprisoned by powers that govern financial debt, by leaders who divide us with hate and wound us with wars, and by institutions that brainwash us into crippling belief systems.
Like the walls of Jericho, it is time to bring these walls crumbling down. History has taught us that the battle of Jericho was won with trumpets and a conquering army. But history has not given us the full story. Through angelic appearances we hear the rest of the story. They tell us that the Israelites were given a secret code that showed them how to construct special trumpets that emitted special sounds. In the Joe Crane appearances, about which I have co-authored two books (http://gwhardin2.herokuapp.com/books), the angels report that the tones used were from the Solfeggio System that I describe in my three previous articles on “The Greatest Discovery Never Seen” (http://gwhardin2.herokuapp.com/articles). These tones are what brought down the fortress walls of Jericho.
What I am about to reveal is that we can use special patterns of these same tones to crumble the walls of our prison planet. The way we pull that off is that we use ourselves instead of trumpets. And instead of a conquering army, we use the fundamentals of consciousness itself. I will reveal this information in four sections:
1. The Power of Harmony Over Disharmony … A Secret of the Sri Yantra
2. How to Turn Your Cell Phone or computer into a Harmonic Emitter …
Become a Harmonic Anchor
3. Co-Creating the Harmonic Grid … Resonating Patterns of Awakening
4. Crypto-Water … How to Make Highly Structured Harmonic®Water for your Body
The next article will be Part 2 … THE ASCENSION GATEWAYS — Living in the Supra-Effect
In my previous article noted above, I went into great detail how the latest discoveries regarding consciousness govern not only modern science, they also govern the universe as described by Dr. Robert Lanza’s Theory of Everything in his book Bio-Centrism. Now it’s time to put this information into action. But keep in mind that the Harmonic Grid I am going to promote here can only be possible if you choose to use this tool. I have no expectation on my fellow humans. Whatever you/we decide is fine by me. But let us decide, as we must.
The Power of Harmony Over Disharmony
In Pythagoras’s “Harmony of the Spheres” and Kepler’s “Harmony of the Earth” we find abiding evidence that everything from music to the movement of galaxies connects in concordant splendor. This connection is the unmistakable evidence of Oneness-in-Action. Even Chaos Theory notes that out of chaos comes order. So what could possibly cause anything to be out of harmony? This leads us right back to the beginning of our mutual journey through these articles — the Observer Effect. What Australian National University unquestionably proved is that the observer can create reality, no just change reality. What one must then conclude is that the only way disharmony can function is some aspect of the Observer has chosen disharmony to exist. Why would any sentient being choose thus? Books could be written about an answer to this question and we still would not arrived at a conclusion that would make sense. I will offer my own discovery in the sequel to this article, “The Ascension Gateways.” What is obvious is that disharmony exists. Now what are we going to do about it?
In “The Greatest Discovery Never Seen” I go into detail as to the consequences of this chosen-disharmony by pointing out that artificial intelligence (AI) is the antithesis of Consciousness — which is No-Consciousness. I also go into great detail as to how scientists now have growing evidence that we are indeed living in the Matrix. And that Matrix is NOT based on harmony. My concluding statement is that all of nature is oriented on harmony, and because of that, whenever harmonic systems engage dis-harmonic systems  (or anharmonic systems), harmony dominates and disharmony either moves into entrainment with harmony or disharmony disappears.
What I am about to show all of you is how we can return ourselves and our planet back to being harmony-based using what I call the Harmonic Grid. The principle of what I am divulging is based on three pilot studies that show that such a grid not only can work, it does work when supported by human choice.
One of the consequences of discovering the Solfeggio System is that I also discovered that it is directly related to a secret of the Sri Yantra (https://www.youtube.com/watch?v=HQtibPJt6Pw). The Sri Yantra is one of the most sacred symbols in all of sacred geometry. The mathematics involved in its make-up is amazingly complex. Each of the 9 pyramids that make up the Sri Yantra has a set of solfeggio strings and loops that weave together to make up what the angelics call the “Fabric of the Universe.” I call each one of these pyramids a “seed,” because each pyramid fosters a weave of numerical vines that intertwine with the weaves of the other seeds.
The pyramids of the Sri Yantra connect via two looping systems. The first infinity-symbol looping system is based upon the duad, or dualism, or doubling. We start with the first seed, 1. Then 1×2=seed 2, 2×2=seed 4, 4×2=seed 8, 8×2=16=1+6=seed 7, 7×2=14=1+4=5, 5×2=10=1+0=1, and we start the infinity-symbol loop all over again. It should be noted that this doubling pattern also forms the basis for what is called Rodin Vortex Mathematics. That system came out of Bahai scriptures (https://www.youtube.com/watch?v=svi6KmtPDQM). Here is a 2D display as to how the seeds show up: 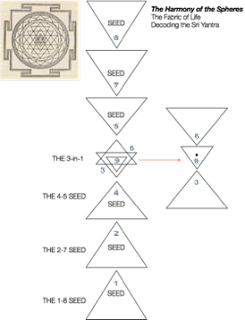 At the center of the Sri Yantra is the second loop based on the monad, which is triune (3-6-9, what Tesla used in his work), or the Three-in-One, creating what I call the Heart of Source. The Solfeggio System and the Rodin system came forth by way of sacred messages. The implication is that these systems are sacred in nature, and capable of returning us to its our own sacred (natural) condition.
In the Solfeggio System (which includes the Solfeggio Matrix, (http://www.soundsofwonder.com/solfeggio.htm#matrix), each seed has four sets of solfeggio-numbered loops that continuously weave in and out of each other and even into the other seeds. It’s a magnificently woven tapestry of toruses with other toruses, never ending, ever completing. At the center of the Sri Yantra is the Point-of-Oneness, or the bindu. It’s not important that you understand the following explanation because I will provide an mp3 file (20 minutes of tones … put your device on repeat) that you can download to create your own harmonic emitter. If you wish to skip the following technical explanation, go to the next section. 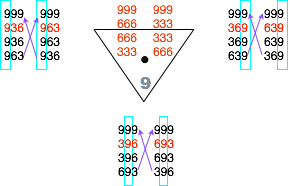 Each loop of the four sets of looping strings of solfeggio numbers create a Fibonacci string, where each number added to the next number yields its follow-up number (using Pythagorean skein, like mod 9 with no zeros) … 999+936=936, 936+936=963, 936+963=999, 963+999=963, etc.  At each 999 number the looping can jump to one of the other three loops, each loop being a infinity-symbol-type flow. When you constantly loop all four sets, you create a harmonic pattern that begins resonating with the microtubules and DNA antennae in our bodies. Each triangle of the Sri Yantra does this with different solfeggio numbers from the Solfeggio Matrix.
One way to use this pattern is to convert all the numbers into frequencies. And when these weavings of Fibonacci tones constantly flow, your body begins to “remember” Harmony-Within. I’ve created two albums using these tones that you may listen to (https://www.youtube.com/watch?v=Mqh5npk654I). The albums (http://gwhardin2.herokuapp.com/books) do not use all the tones shown here. However, it should be noted that the human brain is quite good at weeding out what it thinks it doesn’t want to hear. And consequently listening to these tones over speakers or earphones may have limited effect even when they are set to isochronic or binaural-beat arrangements.
What the body accepts more readily are scalar versions of these frequencies. To accomplish that, one has only to download the sound file to one’s cell phone, computer, or mp3 player. Once the file is on your device, a few steps need to be taken to turn the sounds coming out of your earphone jack into scalar tones.
How to Turn Your Cell Phone or Computer or MP3-Player into a Harmonic Emitter
Why turn your musics device into a harmonic emitter? Throughout history, estoterics have known that grids lay upon the earth. The nodes, or intersecting points, have invariably been sacred sites across antiquity. The best known of these grids is called the “Earth Grid,” which is geomagnetic in nature. In the picture on the right, you see even finer detail of gird lines called “ley lines,” also geomagnetic in nature. These are the life flow of our planet not unlike the blood in our circulatory system in our bodies. If these grids or parts of the gird are blocked, it’s not unlike having a blockage or thrombosis in our blood vessels. The body is thrown out of balance and we become ill. The same is true with the Earth Grid.

There have been many ways in which the Earth Grid has been compromised over millennia to foster the wounds that have festered into making our world a prison planet. Other girds laid on top of the Earth Grid are described in the Keys of Enoch (JJ Hurtak, The Academy of Future Science, 2009), and the Voyagers II (Ashayana Deane, Granite Publishing, 2001). Also described are what are called “fences” or “shields” that are meant to create blocks of these grids. These blocks have been put in place to create what we currently face — a prison planet. These blocks are like erected walls that keep us from accessing our greatness, our sacredness, our remembering that we are magnificent creations of Source.
However, now you can have the capacity of co-creating a grid of your own choosing — the Harmonic Grid. And like the walls of Jericho, you have the capacity of crumbling the walls (energetic fences) that have kept us from our inherent right to joy, peace, wholeness, and wellness.
There are three steps to becoming a node of the Harmonic Grid:
1. Download the tones as a music file to your cell phone, or computer, or iPad/Tablet. Use your resident music app or iTunes to play these tones. You may download the tones from my website at … https://s3.amazonaws.com/gwhardin.public/9seedAll.mp3 … If the browser you are using does not have a “Save” button, simply click the pause button on screen and then do a “Save As” under your “File” menu bar heading. Or you may create your own set of tones based on the Fibonacci flow patterns shown above.
2. Turn your tones into scalars by attaching a scalar converter wire (1/8th inch plug) to your earphone jack on your device. A detailed description as to how to make this device can be found at … http://s3.amazonaws.com/gwhardin_production/articles/pdfs/000/000/016/original/Article_Scalar_Antenna.pdf?1475260384
If you are among the many who can’t handle a pair of pliers, you may order this scalar converter wire at … http://soundsofwonder.com/Jericho.htm ….  It looks like something like this:

3. Attach the plug of your scalar converter to the earphone jack of your device and the alligator clip to some form of a Tesla antenna. The easiest antenna to make is called a Tesla caduceus coil. The instructions to make your own are at … http://s3.amazonaws.com/gwhardin_production/articles/pdfs/000/000/016/original/Article_Scalar_Antenna.pdf?1475262071