The Matrix film trilogy is a masterpiece unlike any other I have personally seen.

The depth and hidden meaning of the film is truly remarkable and if contemplated proficiently, could change someone’s life forever.

One of my favorite scenes in the first film, is when Morpheus is walking with Neo explaining to him what the Matrix is, but while Neo is listening, he gets distracted by the beautiful Woman in the Red Dress.

Morpheus then asks, “Were you listening to me, Neo? Or were you looking at the woman in the red dress?”

Before Neo can admit he has faltered, Morpheus tells him to look again, but this time Agent Smith is pointing a gun directly at his head.

So what is the deeper meaning behind this scene? What does the Woman in the Red Dress represent?

First of all, it’s important for the reader to grasp what precisely Neo and Morpheusrepresent in the movie.

Morpheus, in ancient Greek mythology, is a messenger of the gods that enters the dreams of mortals to share esoteric knowledge and hidden messages with human beings. He can take on any form, but his mission and message remains the same.

Thus, he can be called a messenger of Truth, particularly as it pertains to the character in the Matrix.

Through Neo’s efforts to find deeper answers to the questions he feels burning deep down inside him, he finally connects with the great Morpheus, and his journey down the proverbial Rabbit Hole begins…

In other words, Morpheus (as played by Lawrence Fishburn) is merely a flesh vehicle for the message of Truth, to ultimately help liberate man from the Matrix. He is trying to teach Neo (the new/young one) about the Matrix system (society) that he has been born into. Deeper still, Morpheus has plans to reveal the hidden Truth about who Neo really is, which extends far beyond what society has conditioned him to believe.

This is extremely profound, because it embodies the story of mankind. There have been numerous messengers of Truth, from all walks of life that have stood against the system and tried to liberate the masses from the ruling class and this Matrix like system. They have tried to wake us up to our true power, to look beyond the deception and lies. 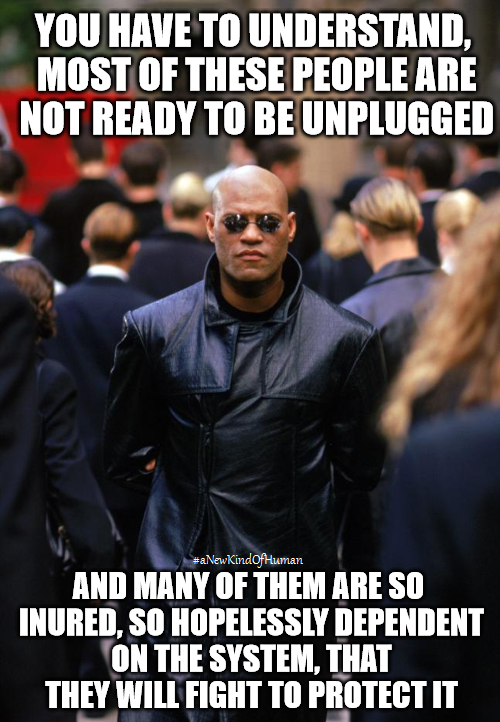 But this is not an easy process, because our society is full of distractions that are preventing us from listening to the Truth, which is precisely what happened with Neo in this brilliant scene.

Morpheus is explaining the Truth to Neo about the Matrix, but then he gets distracted by the attractive Woman in the Red Dress.

What she represents is simply a distraction that interrupts our connection with hearing the deeper message of Truth. This has nothing to do with her gender, she is simply a mindless product of the system, and has been created for the purpose of distraction.

Agent Smith, with his gun, represents the danger that the enticing distraction of the Woman in the Red Dress really is when we look beyond the external surface illusion. When Neo asks Morpheus more about Smith, he also explains that “anyone we haven’t unplugged is potentially an agent,” which means that they the average person has been brainwashed to attack anything that threatens the Matrix system, because their minds are still controlled by it.

Morpheus also explains to Neo that this experience is not actually real, but they are currently in a training simulation program to teach Neo about the Matrix, in order to help him see beyond the illusions that often times hypnotize us, since we have been conditioned from birth to want meaningless and superficial things that stimulate, and excite, the vulnerable aspects of our undeveloped psychology.

For us, the Women in the Red Dress comes in the form of television, alcohol, drugs, misuse of social media, celebrity culture, pornography, superficial relationships, materialism and the consumer life style, amongst other forms of shallow escapism that prevent us from connecting with the Truth.

We must look beyond the face value of these things because they ultimately distract us from a much more meaningful life and existence.

Of course, this blog is ultimately my personal interpretation of this brilliant movie scene, and not everyone will share my views. What made the Matrix trilogy so brilliant is that it affords the viewer the opportunity to engage in philosophy and contemplative thinking.

If you would like to explore the concept of the Matrix in which we currently live, and the history of how we arrived at where we are today, please watch the bellow presentation that I gave a few months ago. In order to protect our minds from the system’s insidious influence, we must first become aware of its methods.

Additionally, for those struggling on their path and looking for a detailed guide on how they can change their lives and find deeper meaning and purpose in the world (and how to fight back against the Matrix system), please read my personal story on how I overcame my past that was dominated by addiction, alcoholism, and depression, amongst other things HERE.

All my work is open source and I encourage it to be reproduced. I only ask that you give me credit, and include my social media profiles as listed in the EXACT FORMAT above, in an effort to help me build a formidable following of people truly intent on learning and creating positive change. If you are not willing to do that, you are NOT permitted to use my work.