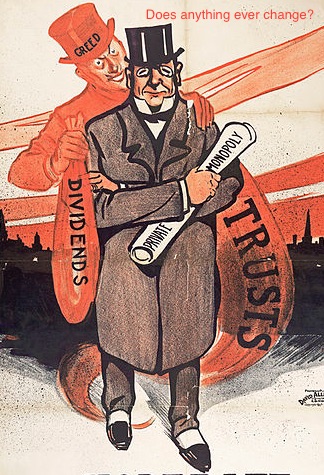 I have pointed out in previous articles how most of the growth in stocks over the past few years has been due to stock share buybacks. Without this hideous (and at one time illegal) practice, there would have been no bull market over the last few years.

That’s right. Research from no other place than Wall Street, itself, indicates that almost all of the returns since 2009 have been due to stock share buybacks!

Liz Ann Sonders, chief investment strategist and perma-bull at Charles Schwab, recently acknowledged that “… there has not been a dollar added to the U.S. stock market since the end of the financial crisis by retail investors and pension funds….” Since every buyer has a seller (and vice versa), what group or groups had enough of a buying presence to push the S&P 500 14.2% off of the February closing lows? Corporations. (Seeking Alpha)

Most people assume what has kept the market afloat this year after sinking 11% at the start of the year was a mixture of better news out of China, oil prices stabilizing, and indications that the Fed won’t raise rates as much as thought. But the real thing bouying the market could be something else: Stock buybacks…. The stock buybacks come at a time when major investors including individuals, foreign investors, and pension funds have been selling off their shares, according to a note from Goldman Sachs, amid market volatility and weak oil prices. (Fortune)

First, it is kicking in because companies are nearing the end of their capacity to keep eating themselves. Earnings have been falling while debt has been stacking up, and so the capacity just isn’t there any more. (And I mean even the doctored earnings — as almost all major corporations have moved away from GAAP reporting policies — have been falling badly.)

Secondly, buybacks have gone insane to the point where the practice is even starting to reek of death to market bulls who are growing wary of them.

Over the past five weeks, the value of shares bought back has fallen 42% (yoy). The number of scheduled buybacks has fallen off substantially this year (35% below last year’s pace). So, we can anticipate the market will lose some of the hot air that once kept it aloft.

Here are two confusing headlines for you, released this week within 24 hours of each other: First comes Bloomberg’s “Bull Market Losing Biggest Ally as Buybacks Fall Most Since 2009.” Ah, but then came the Financial Times, with “US companies step up share buybacks in the first quarter of 2016….” At face value this would seem difficult. However, Bloomberg and the FT are in fact measuring two different things. Bloomberg has been looking at buyback announcements so far in 2016…. The FT meanwhile has been looking at preliminary numbers for the first quarter from S&P/Dow Jones indexes. These suggest that US buybacks were actually up 20% in this year’s first quarter, compared to the old year’s last…. So, what’s the upshot? …As David Lefkowitz, senior equity strategist at UBS, puts it: “earnings per share were down around 6% in the first quarter so it’s not terribly surprising that there should be a slowdown in buyback announcements.” He stressed however that buyback announcements are just that – announcements not activity. He also pointed out that the oil sector’s early-year wrestle with ever-lower crude prices, and profit worries at the major banks, have left corporate America with a lot less cash to flash…. Corporate buybacks may not continue at the pace we’ve seen since about 2011, but it seems unlikely that they’re going to fade away either. (News.Markets)

In other words, leftover buybacks from last year’s announcements are still unfolding, but announcements of additional buybacks are diminishing quickly as corporate cash drops.

We are now a nation full of companies with much bigger piles of debt and much less capacity to keep propping up their share prices with buybacks because those companies are rotting from within. Buybacks syphoned money away from capital expansion and research and development in order to deliver candy to investors now at the cost of crippling the company down the road.

All of that was smiled upon (until now) by Wall Street and government for saving the day while losing the decade. Yes, a decade of potential recovery has been consumed by milking corporations dry, and there will be hell to pay as a result of this self-consuming greed.

Former Republican presidential candidate, Carly Fiorina, championed this kind of corporate management during her stint at Hewlett-Packard until the Crowned Executive Officer was forced off her throne. During her brief reign, HP bought back $14 billion of stocks, which was more than its entire profits during that same period ($12 billion).

That was total self-cannibalism, as during that time HP practically eliminated research and development, caving in to the idea that it was no longer capable of innovation and dominance in the consumer electronic field that it had long dominated. They gave up and walked away from their staple market of personal computers and home printers. Then they rejigged this plan into severing off separate companies. Contrasting this to Apple, can you even think of the last thing HP invented? Can you even remember the last thing that someone else invented that HP successfully produced and popularized?

Because of her great accomplishment at HP, Fiorina believed she was qualified to become president of the United States. Having successfully gotten rid of her, did HP learn anything? Of course not. Her successor tripled down on all of this, buying back $43 billion in shares on $36 billion in profits! Following him, Leo Apotheker did the same thing, buying back nearly a billion dollars in stock every month of his brief eleven-month reign. This is a company that knows how to eat itself one leg at a time.

“HP was the poster child of an innovative enterprise that retained profits and reinvested in the productive capabilities of employees. Since 1999, however, it has been destroying itself by downsizing its labor force and distributing its profits to shareholders….” HP declined to comment. (Reuters)

That’s what you do when your business stinks so bad no one wants your stock because you have started to smell like the toe fungus and old urine that odorizes a bad nursing home. When the company is selling its own limbs on the meat market, it might not be in the healthiest of shape.

When profits are in perpetual decline, you cover the stink of your own slow death with the sweet smell of candy. You throw grain (dividends) to the market bulls to get them to gather.

On Friday, December 10, 2010, Vermont Senator Bernie Sanders walked on to the floor of the United States Senate and began speaking. It turned out to be a very long speech on corporate America’s decline, lasting over eight and a half hours. And it hit a nerve. Millions followed the speech online until the traffic crashed the Senate server. This is that speech.

What have stock buybacks gotten us?

No wonder corporate stock buybacks were illegal until Reagan changed that during his tenure of deregulation. Yes, that deregulation did wonders for the stock market for a long time. It’s amazing how rich shareholders can become (especially the board members and CEOs) when they dine for years on their own company. It’s also amazing how rich you can become when no one is paying for the largess because it is bought on credit.

However, greed and self-delusion among America’s corporate leaders has finally reached the zenith that comes just before self-annihilation. That is what happens when you get carried away with taking the regulations off of avaricious activity. Greed gets bolder and bolder as it explores the outer limits of its success. Evil contains the seeds of its own destruction. It always reaches too far.

Responsible use of credit buys innovation (research and development) or production expansion for the future. Greedy and irresponsible use buys profit sharing for the present when profits are down. That lack of rigorous self-discipline is the new American leadership norm.

For all of this, corporate bosses get bigger and bigger pay and eventually rise to become presidential candidates. That’s because they are best suited to run a country that advocates this kind of business by stripping away the laws that once governed such greed. Those laws were created because past experience taught us that humans couldn’t be trusted to act in the company’s (and the nation’s) long-term best interest, instead of their own immediate self-interest. Left on their own, many would reap and run. We always forget the lessons of the past, so we ditch those laws when they seem to restraining our progress.

However, the buybacks aren’t yielding the returns they once were, and the corporations have already taken on a load of debt for past buybacks that is even threatening the credit rating of some. Earnings have declined steadily as money spent on building for the future has dropped dramatically. It looks like the golden years when companies buy themselves are winding down, and we shall all convalesce together.

International Business Machines Corp. (IBM) is a poster child for questionable buybacks…. Over five years, IBM bought back $59.1 billion in common shares, while its stock returned only 5%. Meanwhile, the S&P 500 returned 81%…. There have been plenty of solid arguments that IBM could have made much better use of that money by investing in its business. After all, the company’s annual sales have declined 24% over the past five years, while its earnings have dropped 16%. (MarketWatch)

With so many American corporations convalescing, it’s a good thing we have Obamacare.