The NPTB have set up someone to take action against Trump. And soon.

Not only will the Russia/Trump story not go away, it will build into an orchestrated crescendo of change.

Look for the RV to appear somewhere in the weeds of this well scripted drama.

With Washington in an uproar over James Comey’s firing amid his Russia probe, the president and his secretary of state welcomed Foreign Minister Sergei Lavrov to town.By Michael Crowley 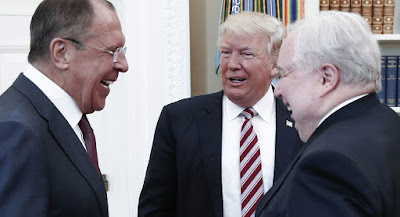 On Tuesday, President Donald Trump fired his FBI director, James Comey, amid a federal investigation into Trump’s ties to the Kremlin. On Wednesday, Trump welcomed Russia’s foreign minister and Moscow’s controversial ambassador into the Oval Office for a friendly meeting to discuss improving relations between the two countries.

Far from showing signs of tension or discomfort over the awkward timing, Trump was seen in photographs smiling and laughing with Foreign Minister Sergei Lavrov and the ambassador, Sergey Kislyak, whose contacts with former national security adviser Michael Flynn led to Flynn’s ouster in February and were the subject of a dramatic Senate hearing on Monday.

The images and upbeat statements from the two sides were in jarring contrast to the rising alarm in Washington among Democrats and some Republicans that Trump might be concealing Russian influence over his actions. Trump has repeatedly pledged warmer ties with Russian President Vladimir Putin despite bipartisan condemnation of Putin’s foreign aggression and efforts to influence the 2016 election.

While sympathetic to the need for continued dialogue with Russia, former Obama administration State Department chief of staff Jon Finer described the strange dissonance of Wednesday’s events as “a perfect storm of bad karma, bad judgment and bad luck.”

Lavrov, who also held talks with Secretary of State Rex Tillerson at the State Department, was in Washington for the first time since 2013. The Obama administration did not welcome him after Putin’s 2014 annexation of Crimea triggered a new era of hostility between the two capitals.

Told by a reporter before his early-morning meeting with Tillerson that Comey had been fired, Lavrov, who had just arrived from Moscow, replied much as official Washington did on Tuesday night: “Was he fired? … You are kidding.”

In an unscheduled surprise, and another signal of Trump’s diplomatic intentions, Trump also received former Secretary of State Henry Kissinger in the Oval Office on Wednesday. Kissinger has long argued for a more cooperative relationship between Washington and Moscow.

Sitting next to Kissinger, who served President Richard Nixon, Trump said that he and Lavrov had had a “very, very good meeting,” in which the men sought to halt “the killing — the horrible, horrible killing in Syria as soon as possible and everybody is working toward that end.”

Russia has been promoting a new plan to wind down the fighting in Syria, where it conducts military operations on behalf of its ally, President Bashar Assad.

“These were meetings that had been on the books for a long time,” spokeswoman Sarah Sanders said during Wednesday’s White House news briefing. “He should be meeting with the foreign minister.”

Former U.S. officials said it is customary for the president to receive a visiting Russian foreign minister, especially after Tillerson met with Putin during his trip to Moscow last month.

But Lavrov’s visit seemed to be a late addition to his planned trip to Alaska, where he and Tillerson will participate in a multinational Arctic Council meeting. TASS reported that the two men originally planned to meet one-on-one in Fairbanks, but added the Washington sit-down only a few days ago. It is unclear when the meeting with Trump was set.

The Oval Office photographs showing Trump, Lavrov and Kislyak seeming to joke around together were taken by the official Russian photographer and released by Russian news agency TASS. The meeting was closed to the U.S. news media, and the White House did not release its own photographs.

A White House statement after Lavrov’s visit said that Trump and the Russian had “emphasized the need to work together to end the conflict in Syria,” but, using broader language than most recent Trump administration statements, “raised the possibility of broader cooperation on resolving conflicts in the Middle East and elsewhere.”

“The President further emphasized his desire to build a better relationship between the United States and Russia,” the statement concluded, even as members of both parties worried about the effect Comey’s firing might have on the active FBI investigation into whether Trump or his campaign associates had improper ties to Russia.

Speaking at the Russian Embassy after his White House visit, Lavrov said that his meeting “confirmed that despite all of the difficulties, our countries can and must act together to help solve key problems on today’s international agenda.”

Russia has sought for years to work as a co-equal partner with the U.S., even as the Obama administration and Western European governments have insisted that the Kremlin must act less aggressively toward its neighbors and internal political critics and stop practicing political sabotage via cyberspace.

Also Wednesday, Russian President Vladimir Putin told CBS News in an interview that “we have nothing to do with” Trump’s firing of Comey — although Putin had been asked only how Comey’s firing might affect U.S.-Russia relations, not whether Russia had played a role in the decision.

Russian Foreign Minister Sergei Lavrov met with Secretary of State Rex Tillerson for more than an hour at the State Department, where the men discussed Ukraine and Syria. | Getty

Earlier, Lavrov met with Tillerson for more than an hour at the State Department, where the men discussed Ukraine and Syria. The two men agreed to continue talks towards what a State Department statement called “strategic stability.”

The positive tone throughout the day was a marked contrast from Tillerson’s mid-April visit to Moscow, where he sat grim-faced next to Lavrov for a dour news conference that focused on the U.S.-Russia divide. Days earlier, the U.S. had launched a missile strike on a Syrian airfield to punish the Assad regime’s use of chemical weapons, an act in which Trump officials said Moscow may have been complicit. The Kremlin bitterly protested the strike, said in a statement during Tillerson’s visit that U.S.-Russia relations are at “their worst period since the end of the Cold War.”

There was little of that talk Wednesday, even as Democrats made some of their boldest charges yet that Trump could be covering up a huge conspiracy that would reveal him to be acting under Kremlin influence. Trump officials call such charges laughable paranoia and an effort to rationalize Hillary Clinton’s election defeat.

Lavrov’s first visit to Washington since before the annexation of Crimea, and Trump’s willingness to greet him in the Oval Office, is a clear sign that Trump is determined to pursue better relations with Putin despite intense political headwinds.

“The symbolism does seem significant,” said Samuel Charap, a former State Department official now with the Rand Corporation. “At least on a diplomatic level, there’s a degree of normalcy that the Obama administration was trying to deny Russia.”

It is unclear when Lavrovs’s meeting with Trump was set, though former U.S. officials said it is customary for the president to receive a visiting Russian foreign minister. Tillerson met with Putin during his April 12 visit to the Kremlin.

It is not clear whether Kisylak had previously visited the Trump White House, which does not disclose visitor records. But the Russian diplomat’s appearance was striking given the furor around his past contacts with multiple Trump associates. Flynn was fired after the revelation that he had misled White House officials about the nature of several conversations he had with the Russians during the transition. Even some Trump officials were reportedly concerned enough about Flynn’s contacts with Kislyak to request an intelligence file on the Russian.

Trump’s son-in-law Jared Kushner also met with the envoy during the transition. Attorney General Jeff Sessions recused himself from the Justice Department’s ongoing investigation into ties between Trump and Russia after the revelation that he had failed to disclose two past meetings with Kislyak during his confirmation testimony.

It is unclear whether the men also discussed plans for a meeting between Trump and Putin. Russian media have suggested the men could meet for the first time around the G-20 summit in Hamburg, Germany, in July, which both Trump and Putin will attend.

In an interview with a Russian television station last week, Lavrov said that because expectations would be high for a Trump-Putin meeting to “deliver specific results … it needs to be prepared thoroughly. We are working on that right now.”

While acknowledging the awkwardness of meeting Russian officials amid charges of collusion between the Trump campaign and the Kremlin, former diplomats and Russia experts say that shutting out Moscow entirely is not a practical option.

“It’s the paradox of dealing with one of the world’s most important countries. You can’t not deal with them because of the cards that they hold,” said Matthew Rojansky, a Russia expert at the Wilson Center in Washington.

Tillerson himself said as much during remarks to State Department employees last week. “The two greatest nuclear powers in the world cannot have this kind of relationship. We have to change it,” Tillerson said.

What’s unclear is how much Trump may still hope to build diplomatic momentum towards the kind of partnership with Putin that he repeatedly promised during the campaign.

At the same time, Putin hopes that better relations with the U.S. — premised on a joint campaign against terrorism — can relieve western sanctions imposed on his country over Russian aggression in Ukraine and elevate Russia’s stature on the world stage.

But Trump will soon face new pressure to maintain a hard line on Russia. Later this month he travels to Europe for meetings with G-7 and NATO officials who mostly take a hard line against Putin — especially in the wake of suspected Russian efforts to swing France’s May 7 presidential election.

The Kremlin has denied trying to interfere in the French or U.S. elections.

“I believe it’s important to engage Russia at high levels,” said Finer, who served as State Department chief of staff under Secretary of State John Kerry. “And I would hope that among the important issues that get raised with Foreign Minister Lavrov are what should be deep concerns about Russia’s continued interference in our democratic processes, and those of other countries.”

Statements from the White House and State Department on Wednesday did not mention election interference.