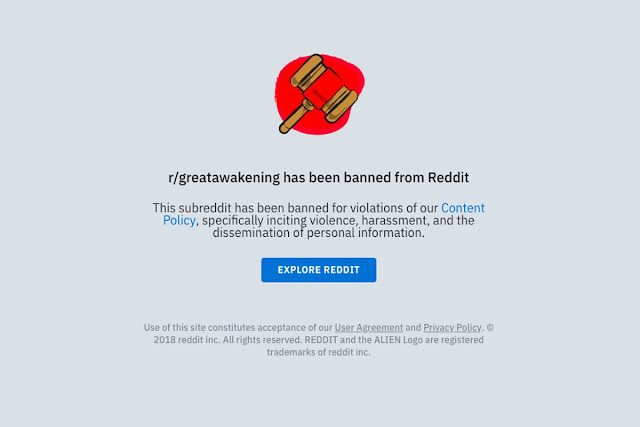 As of Wednesday, visitors to the r/greatawakening subreddit were instead greeted with a message explaining the ban. A Reddit spokeswoman said that “posting content that incites violence, disseminates personal information, or harasses will get users and communities banned from Reddit.”

Evidence Nowhere To Be Found

Looking through the article as a normal inquirer into the matter, I was hoping to get to the point where, as per above, we are given the specific evidence that demonstrates that either,

Alas, this was nowhere to be found. Which means that, as far as can be determined (based on a scan of other mainstream articles on the subject), Reddit has not been willing to specify the words posted that violated content policy, thereby hiding their actions from public scrutiny or debate.

This seems to have become a trend in recent weeks, where accounts have been suspended, channels have been removed, and content deleted for reasons that are usually vague, flimsy, and highly subjective. It’s no wonder there has been an outcry of blatant censorship from the public on many occasions lately, this latest Reddit ban being no exception. But what is interesting is that now, some people are seeing this censorship as working in favor of the cause rather than against it. Note this twitter response to Q-denier Brian Krassenstein:

And indeed, if we look objectively at this ban, and the ensuing mainstream coverage of it, giving no credible evidence for the ban and spending much of their articles informing the public as to who Q is, any reasonable person would be left to conclude that these efforts are stoking the fire of people’s awakening to this matter. Even the contrarian statements of Brian Krassenstein only make sense if they are seen as part of this effort. Certainly nobody in their right minds believe that censoring “r/greatawakening,” the largest Q board on Reddit, would actually cause the 70,000+ members of that board to lose their interest in the Q phenomenon and actually go back to their old mainstream perceptions?

I think it’s time to unveil a new conspiracy theory, although I highly doubt I would be the first one to think of it: I think the Mainstream Media is now in on it. In on what? Our Great Awakening. Yes, I’ve said it. I believe the Mainstream Media, long characterized as the foe of the awakening community, may have already been infiltrated or even fully turned over to the “patriots” of the Q narrative fame, and continues to play the ‘bad media’ role in order to be a catalyst for our great awakening.

Some believe that the cabal/Deep State is reeling but still strong, acting like a cat backed against the wall and still capable of causing tremendous damage. Nonetheless, mainstream media attempts to continue to label Q advocates as tin-foil hat nut jobs in order to maintain the status quo is no longer an effective ploy, if their intention is to prevent an awakening from happening. 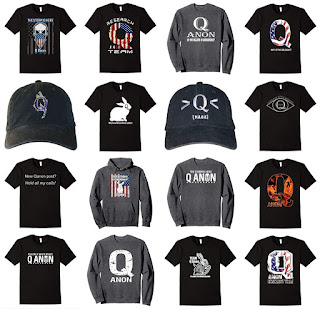 There may be an important spiritual component to our awakening at play here. Rather than blare out the truth across all mainstream channels in order to leave no doubt in anyone’s mind as to how we have lived in deception all our lives, each individual is still being given an opportunity to awaken on their own terms, as a free-will choice. Choosing this rather than having it imposed from outside of us is much more beneficial to the evolution of our individual consciousness.

This is the proverbial reason a UFO has not yet landed on the White House lawn. When incontestable evidence leaves us with no doubt about the reality of something that we previously questioned, we are robbed of the experience of awakening on our own terms. In some cases, the impact of information that wholly contradicts our perception could be traumatic.

I don’t believe there is much more time for individuals to have that sacred experience of awakening. It seems that the truth is now about to burst at the seams and flow abundantly into our world. Let the Great Awakening flourish!

My Master’s thesis on “The Anatomy of Self-Overcoming in Nietzsche” was only the beginning of my journey of exploration into consciousness. I have since lived and taught in Korea, studied yoga in India, written a book entitled “Parables for the New Conversation”, built a film and theater production company (pandorasboxoffice.ca), and started a family. While I endeavor to foster positive change in the world through my works, I hold fast to CE’s maxim ‘Change starts within’. I am humbled and grateful to have joined the CE team as of April 2018 as a contributing writer. You can reach me at richard@collective-evolution.com