Why is there even a need for a global cabal?

What are the OPTB hiding in those Vatican Library Vaults?

How come the world doesn’t work and never has?

If the ZIM redeems at such a phenomenally high rate, what else is so far out of balance?

See folks, the RV is but step one of an endlessly revealing walk for the APTB.

It’s time to tell us everything, all be it gently, slowly, maybe even unconsciously through TV and movies at first.

Have you noticed how entertainment content is quickly changing with all new TV shows and global studio released movies?

As if there’s some global overseer of what we are now to be revealed. Maybe that mechanism has always been in place?

Well as I say about the money all the time, if I’m right about the ZIM sovereign rates, I’ll be right about everything else galactic and beyond. So….

When the hard truth hits, you’ll need a website to congregate and communicate in… and why Showme and I are working around he clock to make a landing pad for the shocked, elated and terrified.

we will broach a necessary topic about “Post RV Survival Tips,” not only for dealing with your sudden / infinite wealth… but everything else’s that is coming along after the RV when the APTB shares full extra terrestrial disclosure… also known as the event.

Which is precisely why there was a need for a cabal conspiracy in the first place… and why there isn’t one now.

The cabal is dead. Kaput.

Meaning, the vibrational quarantine of earth has ended. And our universal Brothers and Sisters from other star systems existing as other non human beings on the planet are feee to make themeselves visible to us.

Remember that TV show on NBC about a year back? “The Event?” Spoke right to the heart of the matter.

Know too that benevolent Ancient Powers That Be, came here to rescue us without our knowing (at least unknown to most).

They are behind the new quantum financial system, not the Elders per se, even though they worked closely with the Elders under their permission.

See, there is (was) three very bad species of extra terrestrials that had infiltrated our planet and species at the genetic level to use humanity for a variety of malevolent purposes.

I know crazy right! Yet… kinda explains why everything is so f-ed up and why far less than 1% of the world’s population controls all the rest.

And if you stop and really think about it, kinda explains why most to all the problems in the world trace back to a single race… the Anglo-Saxons… who are not original “human beings” realized on the continents of either Africa or Lemuria.

Anglos didn’t show up until Atlantis when people of color had their genes altered to become more fair.

Which is an interesting study in of itself because it ends with the first flood, and this current event is the second less water.

But let’s save that face melter for another post.

Instead let’s look at the six prime currencies all revaluing together. What do three all have in common?

None are Anglo. Things that make ya go hmmm to be sure.

And what about those zany Europeans, Americans and Canadians who are all acting as if nothing massive is happening?

What RV? What GESARA? What aliens?

Didn’t they kinda try and drive the entire world into a debt ditch, then attempt to start WW3 in the Middle East as to drive a final nail into the people of color’s coffin?

No wonder the BRICS alliance was created. Survival!

When you peel back the onion of the RV, what you find is a hidden on-going war between earth’s true children (color) and a secrete alien domination (Anglo) over several millennia that is now finally coming to end per the handy work of Heaven.

And we are alive to reap their rewards. Amazing.

Don’t buy it? Look at this map of the world and know everyone above the line is white, and everyone below the line is not. 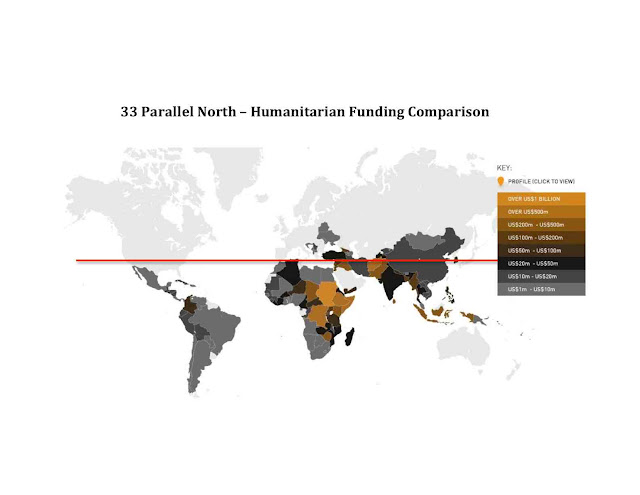 Believe, don’t believe… but folks, GESARA is being readied to roll out after the RV sometime in September, and boy when it does, remember old Yo. I loved this community enough to hold you capable of hearing the cold hard truth second (Dr. WC of the Real Truth Call was first).

Someday you’ll have to share the same hard facts with people you love. That said, a smart and gentle way to helping people understand what’s both happening and happened with a laugh is the new TBS show “People of Earth.”

Take a Net-flicks weekend to get caught up–they’re only in the middle of season two… and it’s pure hard disclosure of the 3 alien cabal species committed to the enslavement of humanity… and it delivers truth with shocking accuracy… produced as part of the surrender terms negotiated with Heaven no doubt.

This crazy alien info kinda makes the RV irrelevant and/or understandable, no?

In the meantime, continue to submit all “Tetelestai” 800# alert sign up and website membership subscription emails totheclarioncalls.com.

Our numbers are getting so high, it’s crashing our initial computer systems and forcing us to expand.

This is a movement folks… and you’re in the front car of a Human Angel roller coaster.

How heroically exciting! Yet utterly terrifying! Buckle up or bail out! Sobeit!