Four recent articles talking about the latest news in #Pedogate……

Gilroy, CA – A new lawsuit filed by a former employee is drawing attention to the Gilroy Police Department, amid accusations that high-ranking officials promoted an environment that was rife with sexual misconduct, which included everything from sex parties to inappropriate relations with underage members of the “Police Explorers” program.After 25 years with the department, Patricia Harrell was fired from her position as a senior police communications supervisor in 2015, just three years before she was set to retire with full benefits. While she was allegedly fired for “improper conduct”with trainees, Harrell claims that she was just trying to warn them about the situation in the GPD, according to an explosive report from the Gilroy Dispatch.Harrell’s lawsuit dropped the names of not only officers but several of their wives and girlfriends as well. She indicated that working for the police department equated with enduring years of unwanted advances, sexual impropriety on the part of officers, and retaliation when Harrell spoke out. The Gilroy Dispatch reported that Harrell’s claim in the lawsuit include:

Catholic churches all around the world have been accused of sex scandals, including the Vatican, which has allegedly paid an astonishing $4 billion since 1950 to settle sexual abuse claims. Far too often these stories involve priests taking advantage of their positions of authority in order to sexually abuse people, often children.

More recently, the UK government and the Catholic church have come under public scrutiny for claiming that victims of child sexual abuse “consented” to their rapes in order to avoid compensating the victims. The Criminal Injuries Compensation Authority (CICA) establishes which victims get compensated, and they do so by determining whether or not the victim gave consent, even if the victim is a child well under the legal age limit.

The Telegraph reported last month that, according to CICA, “A victim can consent in fact even though in law they may be deemed not to have consented.” That’s right, this government loophole can be used to claim that even though a child may be under the legal age limit, they can still provide consent.

To give you a better picture of how this works, one case that was explained by the charity Victim Support involved a 12-year-old girl who was led into the woods and sexually assaulted by a 21-year-old man while she was intoxicated.

Interestingly enough, despite the fact that the man pled guilty to having sex with a minor, she still wasn’t compensated because she allegedly “gave consent” by “voluntarily” going into the woods with him.

Courageous investigative journalist and ex-BBC News correspondent Liz MacKean, 52, who exposed infamous pedophile Jimmy Saville – and ultimately resigned in 2013 over the BBC’s decision to refuse to air her investigation into Saville – has died after suffering a stroke.Only in 2016 did her investigative work exposing Saville’s rampant molestation of children see the light of day on the BBC, featured as Abused: The Untold Story.While it was an open secret within the UK corridors of power, it was not yet public knowledge that Saville was a serial child molester, thus MacKean’s investigative work on Saville’s abuse of children would have blown the doors off the UK’s power elite’s dirty secret.Sadly, the power players in British media worked diligently to cover up the obscene sexually predatory behavior of Saville by not airing MacKean’s expose until after his death. The public only became fully aware of Saville’s rampant pedophilia a year later, after a Panorama documentary on ITV.

The latest movement within media and Hollywood pop culture is a distinctive agenda to normalize pedophilia and the sexualization of children. The latest example of this growing trend within mainstream media is a fashion show that many feel crossed the line from – with scantily clad girls, who appear to be as young as five-years-old, walking the runway in a Victoria’s Secret–style show. 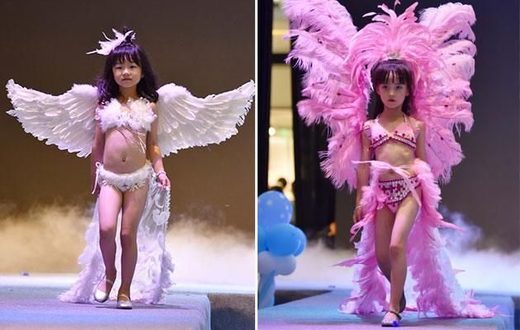 The show, held at a shopping mall in China, revealed shocking images of young girls wearing nothing but lingerie, costume wings, and headpieces. This comes on the heels of Kim Kardashian sparking controversy last month after she posted images of her new children’s line, which included a bikini and lace slip dress.“I’m not dressing my 4-yr-old daughter in a leopard n lace slip dress Kim Kardashian Kids Line,” one disgruntled parent replied.What you see talking place is simply the latest manifestation of what is, without question, a creeping agenda within the mainstream of pop culture to normalize and force public acceptance of pedophilia.