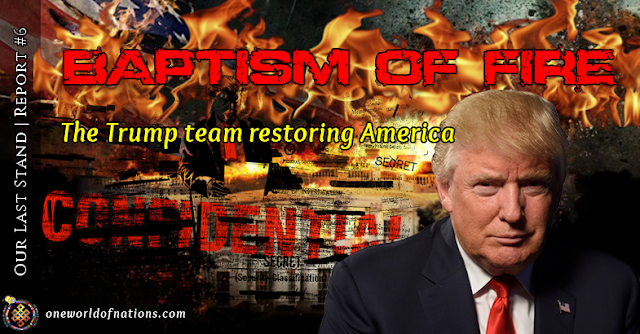 One World of Nations
Our Last Stand Series
12 March 2017

Here are Trump’s and Sessions’ Silver Bullets and RICO evidence to bring the Cabal, Yellen and the 7th Floor Deep State to their knees! Also how to part fund both the RVs now and also urgent PP redemption needs to help America and their Allies recover fast.

Trump and his team need to know where the bodies are buried to launch a full head on reprisal attack. The new team and a genuine democracy respecting American Presidential Republic cannot coexist together with the Vatican, Zionist Deep State Military Industrial self-interest Cabal. This NWO is the worst of the unelected, indifferent, Autocratic Criminal Cabal regimes the Founding Forefathers sought always to avoid. The Deep State is Jesuit controlled, Zionist aspirational NWO and aids only criminal Presidencies such as the Bush / Clinton and Obama hierarchies, with cronies the likes of Kissinger and Greenspan, interfacing with Mossad in Israel and the loathsome Rothschild’s perverse tentacles. A truly evil, parasite regime. Not for America! Not for you. Below is exposure, as karma bites back.

Give Steve Bannon and Jeff Sessions the leads and help now. It’s time to assist the democratically elected choice of the people to restore and unite the States and supporting Allies.

It’s time to Jail the Traitors, Pedos and Zionist criminals, sequestrating their proceeds of crime – all their funds. Unworthy varmints! Time to torch the lot!

With Dirty Politics, two can play. Karma is the consequence which always takes them down. Just when they thought they had got away with it, truth surfaces.