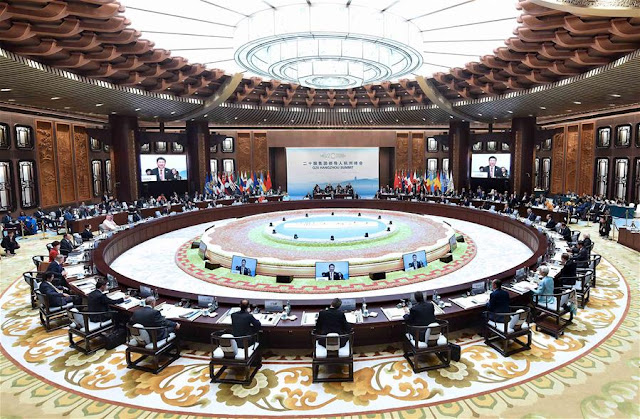 G20 leaders and their benevolent interstellar guides are still in session at this hour.

They’re unified in final settlement talks for all global disputes while in the same country, same city, same room and same table.

They will not leave this negotiating environment until all matters are deemed collectively resolved and absolute unification is achieved.

And when we say all disputes, we mean ALL disputes worldwide as part of a 30 treaty GESARA package currently being signed and implemented by all your leaders of the newly vibrationally sovereign world.  Signature on all treaties is required by universal law.  No country (or leader) may leave until all treaties are made law via their signature.

Former President Barak Obama is not being included in this process as he no longer is deemed the lead diplomat for the Republic of the United States–this is why he did not get the red carpet treatment.  General Joseph Dunford is signing all treaties (including the Paris Agreement on Climate Change) for the Republic of the United States per his own nation’s internal Constitution.

This is precisely why all such “real or new leaders” have gathered in China, as many are publicly unknown given all the severe and dramatic changes made privately in their countries.


Many this weekend are meeting for the very first time as to implement GESARA collectively, and their combined will–through the body of law–will now take full effect beginning in the fourth fiscal quarter of 2016.

Extra terrestrial disclosure and human reintegration back into the Galactic Federation of species will also be implemented and become a visible net result of this multi-decade ongoing negotiating process.

Global monetary reconstitution (aka the GCR/RV) is also included within the GESARA legal framework of change; thus, intake and settlement of all defaulted historic assets–including all fiat currencies–will now be retrieved, redeemed and revalued as well as removed from physical existence.

The entire global monetary reconstitution process is scheduled to complete by the end of your September (9) so your world can permanently re-calibrate beginning in October (1).