There is a flurry of amazing events occurring in every part of our society and I wanted to capture a snapshot of it before it all falls away into the information ocean.  We all know that news that is a day old may as well be a year old…

Corey was tweeting that he was about to come forward with names when he was abruptly arrested and experienced subsequent assassination attempts which he explains in the above video.
(Yahoo!) #ThemToo: ‘An Open Secret’ is free on Vimeo in wake of Harvey Weinstein scandal (I personally recommend this, it is very good!)
(Yahoo!) Corey Feldman Claims His Arrest Was Connected to Sexual Abuse Allegations
(Daily Wire) ‘Guardians Of The Galaxy’ Director: I’ve Been Warning People For Years About Alleged Sexual Predator Director
(The Guardian) Hollywood? It’s finished, claims Oscar-winning director who fled to New York
(Huffington Post) Trump-Linked Pastor: Hollywood Is Full Of Satanists Who Drink Children’s Blood
(Breitbart) Oscar-Winning Writer-Director Paul Haggis Suggests Hollywood Pedophilia Cover-Up
(The Event Chronicle) Legendary Rapper Says Male Musicians Have to Perform Sex Acts to Make It in Music
(MSN) ‘Stranger Things’ Star Finn Wolfhard Fires Agent Over Former Actor’s Sexual Abuse Claim
(The Sun) How Hollywood paedophile ring behind child abuse ‘as horrific as Jimmy Savile’s’ could finally be exposed in wake of Weinstein scandal

(Daily Mail) Former US president George HW Bush apologizes after actress claims he ‘sexually assaulted’ her from his WHEELCHAIR in this photograph – with his wife Barbara standing by his side
(The Gateway Pundit) BREAKING: Hollywood OSCAR-Winning A-List Actor Caught Up in Weinstein Scandal — KEVIN SPACEY
(Yahoo!) Niecy Nash, Cicely Tyson, and other actresses recall being sexualized as early as age 5

(The LA Times) 38 women have come forward to accuse director James Toback of sexual harassment
(The Event Chronicle) ‘I Wasn’t In a Girl Group, I Was in a Prostitution Ring’: Pop Super Star Exposes Hollywood Sex Slavery
You can see Judge Jeanine on Fox News calling out the pedophilia problem on the air in this video:
(Exopolitics) A Life of High Strangeness & Testing for Space Marines (This is a 3 part interview with a new secret space program whistle-blower which I highly recommend!)
(Exopolitics) Covert Disclosure of Antigravity Rectangle Weapons Platforms by USAF Special Operations
(Miami Herald) Miami politician says aliens took her on a spaceship. Now she’s running for Congress.

(Sputnik) ‘ALIENS WILL COME BACK AND HELP US MAKE A LEAP’

(Express) LIFE ON MARS: Aliens could be BENEATH the surface – scientists make shock discovery
(The Sun) Aliens could be living beneath the frozen oceans of sub-zero water worlds, ex-Nasa scientist claims

(Express) ‘NOT A HOAX’ Nazca ‘mummified aliens are not fake,’ claims scientist

(The Sun) From mind control, brainwashing and monsters — theories claim Stranger Things happened in REAL LIFE in a secret government project
(Express) ALIEN SENSATION: ‘UFOs are real… we may not be alone’ says former senior US spook

(CTV News) The search for aliens: Why a planet hunting pioneer is so optimistic

(Daily Mail) Life really could exist on Mars: Hardy bacteria similar to that found in the Arctic may thrive on the red planet thanks to a salty solution that prevents liquid water from freezing
(Daily Mail) Scientists are developing a Harry Potter-style invisibility cloak that could hide objects using light

(March Against Monsanto) Vaccine Debate Erupts After Mainstream Reporter is Injured by Flu Shot
Syria is continuing to be liberated from the Jesuit-created mercenary army ‘Daesh’:

“BEIRUT, LEBANON (2:25 P.M.) – The long and arduous battle for Raqqa City is finally over, the U.S. Coalition announced this afternoon.
The last remaining Islamic State (ISIS) terrorists were transported out of the city, today, and taken to an undisclosed location in Syria.
ISIS occupied Raqqa City and much of the province since their first major military campaign in Syria.
The entire Al-Raqqa Governorate is also officially free of the Islamic State and their affiliates.“

This article is big and full of useful intel and I haven’t had much of the time to put anything together like I wanted until today. I will post some excerpts below.
Also, a colleague of mine has kindly provided a German translation of all four parts of David’s Part I of the 2 Part series ‘Vegas Terror and Disclosure: Is Something Very Big About to Happen?’. You can find the translation at this Google Drive link.

(Divine Cosmos) Something Very Big is Coming, Part II: Is Wikileaks About to Drop the Nuke?
Are we on the verge of stunning, public announcements that will change everything we thought we knew?
The 4Chan insider from our last article is “singing like a songbird” and we will summarize the newest intel in this article.
If what we are hearing is true, Wikileaks is on the verge of dropping a much more damning set of information than October 2016 — literally at any moment.
The Vegas mass shooting may well have been a desperate attempt to distract the public from these impending, epic geopolitical developments.
We have every reason to believe that this collection of data provides signposts that a very big announcement may lead to a defeat of the Cabal.
The Cabal apparently dates back to before the Roman Empire. They are vastly wealthy and believe in segregating their own “bloodlines” from everyone else’s.
AMERICAN ELITE PEDOPHILIA MAY BE ON THE VERGE OF PUBLIC EXPOSURE
The Weinstein scandal has gotten us very close to the edge of this story breaking out in a big way.
Various mainstream articles are already starting to link Weinstein’s crimes to a much greater and uglier conspiracy involving pedophilia.
IT IS IMPORTANT TO KNOW THAT THE CABAL IS BEING OPPOSED
The group we are calling the Alliance is a series of different international factions who have agreed to work together for a common purpose.
Some of the key factions include elements that have now become a majority of the US military and intelligence community.
The Cabal still has a stranglehold on the mainstream media, and thinks nothing of killing anyone who stands in its way.
“Well, then, David, why are you still here?”
The answer is simple and profound. The Cabal must follow a system of immutable spiritual laws that they call “The Rules.”
The main rule that concerns truth-tellers is: You are not allowed to shoot the Red Cross workers.
This means as long as you uphold a positive, service-to-others perspective in your life, you will not “authorize” them to take you out.
With all that being said, it is important to stay light-hearted and maintain your sense of humor.
The US military aspect of the Alliance has been using big-budget Hollywood films to counteract the Cabal’s message.
The disclosure of Harvey Weinstein’s crimes is a seismic event of epic proportions.
It appears to be inevitable, at this point, that the truth is going to break out in a major way very soon.
THE 4CHAN INSIDER APPEARS TO BE THE SAME PERSON SINCE JULY 2016
The insider who has been speaking out on 4Chan revealed that he only was given the name “MegAnon” this past May.
His credibility was strongly enhanced when the Wikileaks “Pizza” emails emerged in October, after he had boldly predicted the contents of their release.
As we learned in the previous article exposing the Vegas atrocity, the 4Chan insider revealed that the Alliance is preparing a major, public announcement.
This would forever validate every “conspiracy theory” about the Cabal. The exact nature of what will be disclosed remains mysterious.
Furthermore, this insider revealed that the hurricanes threw off the timing of this announcement completely.
If these codes [that Julian Assange was tweeting] usually precede an epic new leak within a week’s time, we may see something big drop any day now.
We are already one day past the initial window of October 21st, 2017. This upcoming week could be of pivotal importance.
If this data dump is as big as the insiders are claiming, it is the Alliance cyber equivalent of a nuke.
The Cabal definitely seems to be aware of this, and is fighting back with everything they’ve got — including the badly-botched Vegas atrocity.
Some had asked about the possible release of suppressed JFK assassination data by the president. This is what one of Fulford’s sources had to say:
“https://benjaminfulford.net/2017/10/23/past-presidents-bankrupt-u-s-corporation-go-beg-athon-godfather-bush
One senior Pentagon source who has been consistently reliable in the past said that “The Trump release of JFK files may implicate Bush Senior, Mossad, the CIA, and the deep state.
[It] may be a prelude to an intel dump on 9/11, suppressed technology, the secret space program, and other disclosures prior to mass arrests.”
I just got done having a text exchange with my insider, Paul. I am still in shock but feel it is essential to report what happened.
Just 30 minutes after this article went up last night, at 6:30 PM, Paul was struck unexpectedly in his vehicle… and suffered a head-on collision.
He was the one who had leaked the intel to me about the “smart suits,” which I debuted here last night at 6PM.
What I AM saying is that the Cabal is on the verge of a mass, public exposure. I am one of the people covering that story with intel most others don’t have.”

There was an interesting headline which emerged that I would like to include here. It is from Russia Today about a tweet that Julian Assange tweeted about Hillary Clinton:

(RT) Assange tweet-trolls ‘future president’ Clinton with 2016 repost on eve of her 70th birthday
“WikiLeaks co-founder Julian Assange has apparently wished Hillary Clinton a happy birthday on the eve of her 70th… by reminding the 2016 presidential candidate of her failure.” 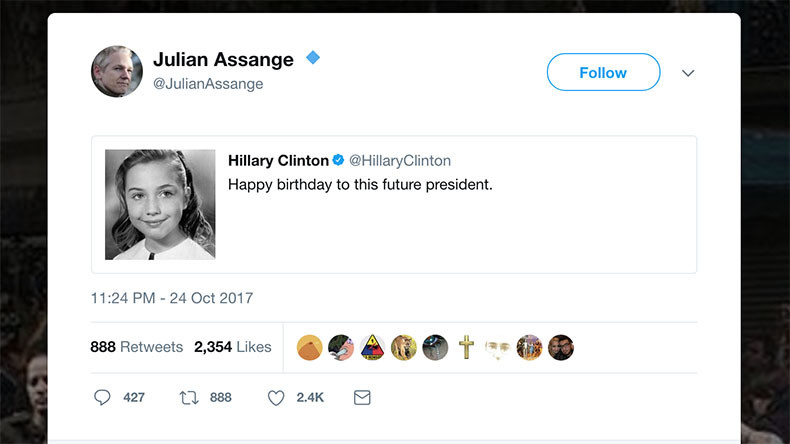 I would like to share a final piece of good news and that is an article that was written by Teresa Sumner from the PFC team. It is titled ‘Know Now That There Will Be A Peaceful Smooth Transition‘ and it is a compilation of Cobra’s intel and other items of interest that remind us that there will be a peaceful transition during The Event and that we shouldn’t be in fear about what will happen on that day.
Thank you very much for checking out this update and I will share an uplifting video below to add to the wonderful article by Teresa: