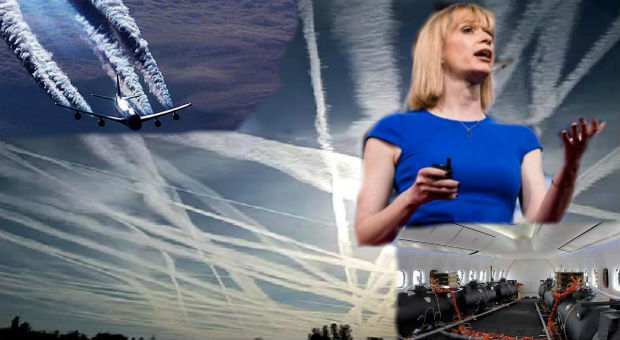 (Daniel Newton) A mainstream scientist has blown the whistle on chemtrails being sprayed into the atmosphere.

A mainstream scientist who specializes in ‘Climate Change’ shocked attendees at the annual TED conference in Vancouver, Canada by blowing the whistle on chemtrails being sprayed into the atmosphere by the government.

Throughout the controversial Ted Talk, other speakers discussed benefits of geoengineering as a tool to tackle climate change.

According to Business Insider On Wednesday morning, computer theorist Danny Hillis got onstage and proposed a series of ideas for what he called a “thermostat to turn down the temperature of the earth.”

Hillis, the founding partner of tech innovation company Applied Invention, rattled off a number of geoengineering concepts that have popped up in recent years, including building giant parasols in space, putting fizzy water into the ocean, and sending chalk into the atmosphere so that it can reflect sunlight and theoretically cool down the earth.

The science of geoengineering has increasingly become a part of the public conversation around climate change and an ever-controversial topic within the scientific community. Geoengineering is a type of weather modification (or climate engineering) which has been researched, but, until recently, has been considered too unpredictable to attempt on a large scale. According to a 2013 congressional report:


The term ‘geoengineering’ describes this array of technologies that aim, through large-scale and deliberate modifications of the Earth’s energy balance, to reduce temperatures and counteract anthropogenic climate change. Most of these technologies are at the conceptual and research stages, and their effectiveness at reducing global temperatures has yet to be proven.

Moreover, very few studies have been published that document the cost, environmental effects, socio-political impacts, and legal implications of geoengineering. If geoengineering technologies were to be deployed, they are expected to have the potential to cause significant transboundary effects.

In general, geoengineering technologies are categorized as either a carbon dioxide removal (CDR) method or a solar radiation management (SRM) (or albedo-modification) method. CDR methods address the warming effects of greenhouse gases by removing carbon dioxide (CO2) from the atmosphere. CDR methods include ocean fertilization, and carbon capture and sequestration. SRM methods address climate change by increasing the reflectivity of the Earth’s atmosphere or surface.

Aerosol injection and space-based reflectors are examples of SRM methods. SRM methods do not remove greenhouse gases from the atmosphere, but can be deployed faster with relatively immediate global cooling results compared to CDR methods.

Hillis told the audience at TED 2017 that in order to “undo the effects of the CO2 we’ve already released” we would have to put chalk in the sky at a rate of 10 teragrams a year. Once Hillis finished singing the praises of geoengineering, climate scientist Kate Marvel was given a chance to respond. Marvel is an associate research scientist at Columbia University, as well as a Science Fellow at Stanford.

“Danny, you seem so nice, and I hope we can be friends, and you terrify me,” she said.

“Geoengineering, she said, is like going to a doctor who says ‘You have a fever, I know exactly why you have a fever, and we’re not going to treat that,” Business Insider reported. “We’re going to give you ibuprofen, and also your nose is going to fall off.’ It is, Marvel believes, a band-aid for the problem accompanied by consequences we can’t currently imagine.”

Marvel also stated that reducing the amount of sunlight is “problematic” and would not do anything about other environmental dangers, such as ocean acidification. Marvel was followed by another call for geoengineering from University of Oxford researcher Tim Kruger. The King of Global Warming Doomsday Prophecies himself, Al Gore, said that geoengineering could be a possible time in the future, but not as the only solution.

Marvel is correct that the consequences of geoengineering are not currently known. However, there have been a number of studies which have lead to disastrous possibilities. Most recently, in late October 2016, the United Nations’ Convention on Biological Diversity released a report examining the problems of geoengineering and whether or not humanity will be forced to employ the practice in an attempt to halt climate change. The report, On Climate Geoengineering In relation to the Convention on Biological Diversity: Potential Impacts and Regulatory Framework, found that geoengineering “would reduce the impacts of climate change on biodiversity at the global level,” but also cause unpredictable rain and temperature distribution on the local level.

The U.N. report states that the effectiveness of geoengineering is “uncertain” and “in reducing the scale of one problem, other new problems would be created. Thus, there would also be risk of the geoengineering action also contributing to other drivers affecting biodiversity loss and ecosystem integrity.” Dr. Phillip Williamson, lead author of the report and scientist with the Natural Environment Research Council in the United Kingdom, says he is skeptical of geoengineering.

The U.N. concludes that although Solar Radiation Management may possibly slow the loss of Arctic sea ice, but not without “unacceptable climatic impacts elsewhere.” One particular method of SRM involves injecting aerosols into the atmosphere via airplanes. The study found that the use of sulphur aerosols for SRM would be associated with a risk of stratospheric ozone loss. There is also a risk that stratospheric aerosol injection (SAI) would have a small impact on climate change but could lead to negative impacts on biodiversity.

The geoengineering TED talks were preceded by a concerning announcement from Harvard related to an upcoming real-world climate engineering experiment. At the recent “Forum on Solar Geoengineering Research,” Harvard engineer (and consistent proponent of climate engineering) David Keith announced his plan for a new project that will assess the risks and benefits of deploying geoengineering on a large public scale. Keith and fellow engineer, Frank Keutsch, will research the benefits and risks by spraying particles such as sulfur dioxide, alumina, or calcium carbonate from a high-altitude balloon over Arizona during 2018.

David Keith said there will be a multi-phase plan for research and conducting real-world testing within the next 18 months. Keith also called for stratospheric spraying within three years and continuous spraying for at least a century. Technology Review reports that Keith said his team is already in the process of “engineering design work with Arizona test balloon company World View Enterprises,” and discussing the “appropriate governance structure for such an experiment.”

“In terms of governance, they have distributed, there’s more actors involved than we expected there would be,” Keith stated. “There’s more need to understand and to speak openly about the associated risks and what they imply for governance.” The very notion of unilateral geoengineering means that other countries could face potential risks. This creates a need for new governance structures, or possibly, a global government. This makes the Trump administration’s support for geoengineering curious since President Trump has been very outspoken against “globalists.”

Yet again, the U.S. government is planning to enact a possibly dangerous, untested technology on not only the American population, but the entire world. There are realistic solutions that do not involve edicts from states and statists. If the free hearts and minds of this world – the free humans – recognize the opportunity for a radical change in individual behavior we could erase the unsustainable, destructive industries that damage the planet and all life. If we choose to stand by and not change our own habits and communities, we are giving the state the impetus to act. We are sending the message that the people cannot organize and accomplish goals based on mutual aid. It’s time to stand together in defense of the life on this planet.