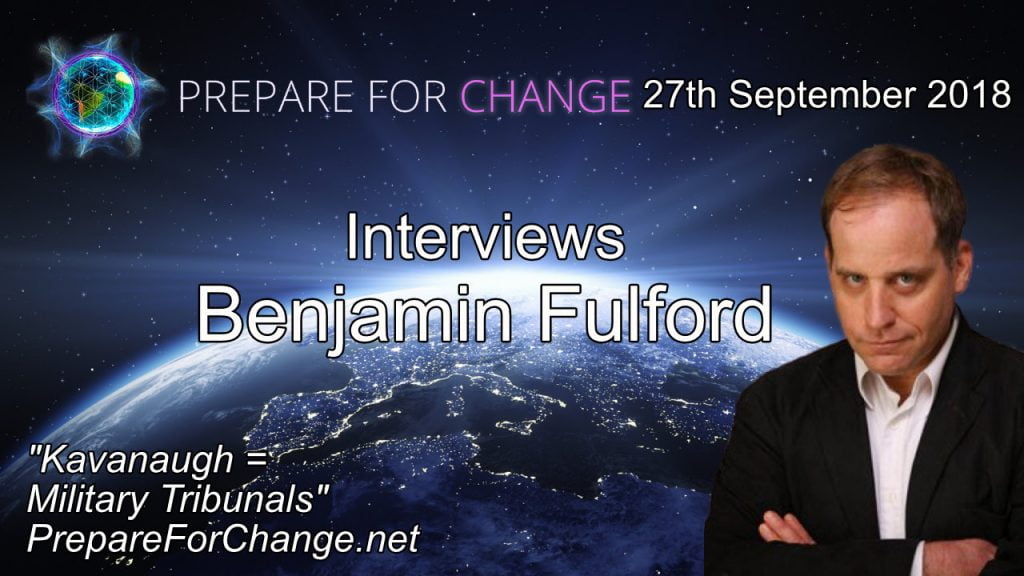 On September 27, 2018, PrepareForChange.net continued our interviews with Benjamin Fulford.

By the time this interview is available, Brett Kavanaugh will be either confirmed or his appointment to the US Supreme Court will be delayed (or something else will have occurred). Ben discusses how the fight in Congress is really because Kavanaugh’s appointment opens the door to military tribunals for many wrongdoers. Benjamin says the big social media companies such as Facebook and Google will likely be broken up, as they are the “new media,” but still controlled by the old families. And we all talk about Japan, the UK and other things too.

Benjamin Fulford continues to work to liberate the planet from the bad guys. He is literally fighting to bring freedom and new life to humanity.

This interview is about 45 minutes long and we hope you enjoy it.

Let’s take our cue from Benjamin Fulford… and turn our world into a wonderful place!

We are an all-volunteer organization. We do set aside a little money to support our website, but nearly all of your donations to PrepareForChange.net support an orphanage of about 400 children in Malawi, Africa.

Think about donating to these children, who have lost their parents. The donation buttons are on PrepareForChange.net.

Benjamin Fulford Says: Lets Rid the Earth of the Psychopaths In Charge, May 17, 2018 with PrepareForChange.net

Benjamin Fulford Says: Asians Build Wonderful Infrastructure But Their Spying is a Bit Much, May 3, 2018, With PrepareforChange.net

The transcript will be posted here when it is complete, usually within a week.