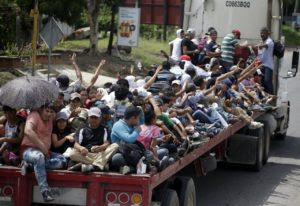 Judicial Watch has had boots on the ground this past week investigating the situation and their observations and statements are invaluable as the mainstream media are adhering strictly to their agenda and presenting the situation as they see fit.

For anyone who is thinking this caravan is an organic army of people springing from a need for food, jobs, or human services, keep reading. The true picture will emerge. This caravan was no accident. Nor was the timing.

These people are not victims; they were paid handsomely for hopping aboard a semi tractor pulling flatbed trailers to deliver “goods” (people are considered chattel—or cattle) to America. Lies have been told and they’re not walking for thousands of miles. The media is having a field day with this. Training has been done to instruct these “migrants” what to say if they are interviewed.

Do they look starving? Sick? They were paid and manipulated for political reasons—and what timing! Right before the mid-term elections. Quite the stunt on the part of the desperate leftists who see the “red tsunami” approaching.

Children and women are going to be hurt. They have been for a long, long time. It has to stop.

This whole thing is a psychological operation, pure and simple. How many will fall for it? That is the question. ~ BP

The caravan moving north toward our border is a serious threat to the sovereignty of the United States. It is a blatant challenge to the rule of law. For this reason we sent our Director of Investigations and Research Chris Farrell and Judicial Watch Investigator Reporter Irene Garcia to Guatemala to uncover the truth about “caravan.” Here is their first report in our Corruption Chronicles blog.

The migrant caravan marching northbound through Central America is an “elaborately planned” movement that’s benefiting human smugglers and bringing disturbing numbers of violent gang members and other criminal elements through Guatemala, according to government sources in the capital city.

“MS-13 gang members have been detained and coyotes (human smugglers) are joining the march with clients who pay to get smuggled into the United States,” a Guatemalan official told Judicial Watch. People from Asian countries waiting to get smuggled into the U.S. through Central America are also integrating with poor Hondurans in the caravan, a high-level Guatemalan government source confirmed. Among them are nationals of Bangladesh, a south Asian Islamic country that’s well known as a recruiting ground for terrorist groups such as ISIS and Al-Qaeda Indian Subcontinent (AQIS). “There are lots of dirty businesses associated with this,” Guatemalan authorities told Judicial Watch. “There’s lots of human trafficking.”

Sandwiched between Honduras and Mexico, Guatemala has been overrun with the onslaught of migrants that began their journey last week in the northern Honduran city of San Pedro Sula. At last count around 7,000 have participated in the trek, a great deal of them rowdy, angry men ages 17 to 40. President Jimmy Morales has ordered the military and police to detain all of the migrants and facilitate their safe return back to Honduras, though thousands have already reached the Mexican border. In a morning interview with Judicial Watch at the Guatemalan Ministry of Defense, Secretary of Defense General Luis Miguel Ralda Moreno said more than 2,000 Hondurans have been sent back home on buses. “We’re doing everything possible to stop the caravan while still respecting human rights,” General Moreno said.

During an afternoon interview at the National Palace, President Morales said that Guatemala has absorbed the huge cost of mobilizing police and military to return thousands of people to Honduras. He would like the United States to help him find the organizers of the caravan so they can face legal consequences. “Mass immigration like this endangers lives,” Morales said. “This is unprecedented. We are in the process of investigating who is behind the caravan.” Morales assures that Guatemala is doing everything possible to curb illegal immigration and asked for cooperation from the United States.

It has been a delicate and complicated task, Guatemalan officials say, because the caravan is a very organized movement that has been well orchestrated. There are rest points along the route with food, water and shelter for the migrants as well as medical care in some areas. “It’s very strategic and extremely organized,” a Guatemalan government source told Judicial Watch. “It is very complex, not a simple march. There is nothing spontaneous about it.” During a visit to the Guatemalan-Honduran border this week Judicial Watch interviewed multiple migrants who repeated the same rehearsed line when asked who organized the caravan, insisting it was a spontaneous event even though there were clearly organizers shouting instructions in Spanish and putting select persons in front of cameras for interviews. All of them said the caravan was not about politics but rather poverty.

Guatemalan officials disagree, estimating that the caravan is a movement of radicalized forces to destabilize Central American countries. Honduran President Juan Orlando Hernández, a conservative, echoes that assessment. In a local newspaper report published last week Hernández asserted that leftist interests seeking to destabilize the country are manipulating migrants. Women and children are being used without regard to the risks to their lives, Hernández said. “The irregular mobilization was organized for political reasons to negatively affect the governance and image of Honduras and to destabilize the peace of neighboring countries,” the president said, adding that many have returned to the country after realizing they’ve been fooled.

Too much of the media and the open borders crowd are tying to fool Americans but this will be harder thanks to Judicial Watch’s educational efforts.

We have been reporting for years that many of those crossing our southern border aren’t innocent women and children, but rather hardened criminals and even terrorists. Why would this current caravan be any different? Our team on the scene in Guatemala (see above) has this disturbing exclusive report:

Besides gang members and mobs of young angry men, the Central American caravan making its way into the United States also consists of Africans, Bangladeshis, Sri Lankans and Indians. Judicial Watch is covering the crisis from the Guatemalan-Honduran border this week and observed that the popular mainstream media narrative of desperate migrants—many of them women and children—seeking a better life is hardly accurate. Guatemalan intelligence officials confirmed that the caravan that originated in the northern Honduran city of San Pedro Sula includes a multitude of Special Interest Aliens (SIA) from the countries listed above as well as other criminal elements and gang members.

There are also large groups of men, some with criminal histories, aggressively demanding that the U.S. take them in. During a visit to the Guatemalan town of Chiquimula, about 35 miles from the Honduran border, Judicial Watch encountered a rowdy group of about 600 men, ages 17 to about 40, marching north on a narrow two-lane highway. Among them was a 40-year-old Honduran man who previously lived in the United States for decades and got deported. His English was quite good, and he said his kids and girlfriend live in the U.S. Another man in his 30s contradicted media reports that caravan participants are fleeing violence and fear for their life. “We’re not scared,” he said waving his index finger as others around him nodded in agreement. “We’re going to the United States to get jobs.” Others chanted “vamos para allá Trump!” (We’re coming Trump) as they clenched their fists in the air. “We need money and food,” said a 29-year-old man who made the trek with his 21-year-old brother.

All of the migrants interviewed by Judicial Watch repeated the same rehearsed line when asked who organized the caravan, insisting it was a spontaneous event even though there were clearly organizers shouting instructions in Spanish and putting select persons in front of cameras for interviews. A few claimed they heard about it on local news in Honduras. All of them said the caravan was not about politics but rather poverty. “I just want to get back to the U.S.,” said a 32-year-old man who admitted he has been deported from the U.S. twice. “We are all just looking for work.” The group radiated a sense of empowerment. One marcher, who appeared to be in his late teens, yelled “you go live in Honduras and see what it’s like!”

Honduran President Juan Orlando Hernández, a conservative, said in a local newspaper report that leftist interests seeking to destabilize the country are manipulating migrants. Women and children are being used without regard to the risks to their lives, Hernández said. “The irregular mobilization was organized for political reasons to negatively affect the governance and image of Honduras and to destabilize the peace of neighboring countries,” the president said, adding that many have returned to the country after realizing they’ve been fooled.

Guatemala is overwhelmed with the sudden onslaught and immigration officials confirmed 1,700 migrants have been returned to Honduras on buses. The first wave of migrants totaled about 4,000, according to Guatemalan government sources, followed by a second, less organized group of about 2,000. The impoverished Central American nation needs help, including logistical, communications and civil affairs support to stop the human caravans. “There are only so many resources we can dedicate to this,” said Guatemalan Secretary of Strategic Intelligence Mario Duarte. Guatemalans are getting robbed and crimes are being committed by the people in the caravans, Duarte said.

You can be sure that Judicial Watch will use its resources to monitor and investigate the border crisis and give you the unvarnished truth about this existential threat to our sovereignty and the rule of law.