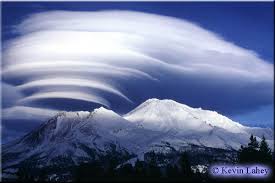 Another view of Mt. Shasta with cloudships

Joanna Cherry: Are there others from Telos up here with us?

Sharula Dux: Yes, people from all subterranean cities have merged with life on the surface, to benefit both civilizations. Some of them are well known.

JC: How does a Telosian come to the surface?

SD: There are three ways. There are entrances on Mt. Shasta, with holographic screening devices to make them invisible from the outside. If somebody wants to enjoy the stars or wander a bit on the mountain, he’ll use these.

The second way is to take a tube, such as to Los Angeles or another subterranean city of the Agartha network. And finally, you can take a scout ship, one of the smaller “space ships” we have.

JC: So some of those ships we see are yours?

SD: Yes, we call them the Silver Fleet. Along with the scout ships, we have three large mother ships. When the mother ships come out–the mountain opens physically–we don’t want to scare people, so we’ve invented machines to create a cloud cover–you call them “cloud ships”.

JC: Could one of us from the surface go down into Telos?

SD: In Telos there is no judgment of others, and we have telepathy between minds. Most people on the surface have judgment thoughts, and these are physically painful to a Telosian. Some are invited to go down, mostly students of spiritual masters. As the world changes into greater light and love, our two societies will come together. This will be a long-awaited and joyous time!

SD: We don’t know yet; when there is enough readiness in people on the surface.

JC: Would you describe a typical life in Telos, from birth?

SD: Well, when a woman first realizes she’s pregnant, she goes to a temple room where she’s given lots of loving support and surrounded with beautiful pictures and music. She sees her baby as beautiful and perfect. This love and perfection go right into its cells. Wonderful building blocks! Both parents talk to the child with great love, sing to it, etc. So it really knows it is loved and wanted. Pregnancy lasts only three months. JC: Three months! But how does the baby survive?

SD: That’s all a baby needs in the womb; it’s born quite healthy and strong.

JC: What a difference!

SD: When the baby is ready to be born, the mother goes to a birthing section of the temple, where she’s assisted by a birthing priestess. The birth is under water– painless–which is best for both the mother and the baby.

JC: Why is that a good way?

SD: As birth usually is on the surface, the baby’s umbilical cord is cut long before it is ready or able to breathe easily and naturally. Often it is struck in order to start its breathing, so its first breath is taken in pain and fear. This leads to people shutting down their breath during life–being half alive!–and to diseases such as emphysema and other lung problems.

When a baby is born in Telos, it slides right in to warm water. It feels right at home. It continues to be connected to the mother by the umbilical cord for perhaps half an hour, while it floats around and rests from the birth process, being loved and welcomed by its parents. Finally, it starts to breathe fully on its own. Only then is the cord painlessly cut with a laser.

For the next two years, the father stays home to help with this crucial time of the child’s life. It’s vital that both father and mother, female and male are present for a child to be fully balanced. Each child is given twelve sets of godparents, most often with children of their own. It spends time with all these families, and begins to feel like all the world is family. This discourages cliques from forming, and de-rigidifies family patterns.

Education begins at three years, and it’s based on the intelligence of the child, not its ignorance. Meditation is taught, reading, dance, sports, math, acting, abstract concepts, playwriting. The kids are taught to think for themselves, and work things out. In a “play and learn” concept, they learn self-expression without violence. Beginning at age five, astral projection is taught, so that children can travel out of body and learn many things. They visit records of the past and view history for themselves; they visit the surface and even other planets. They learn that angels are real, and develop the faith to manifest from the unseen to the seen. They become wise and strong in themselves; there’s no victimhood.

We call the teenage years the “years of temporary insanity.” Kids join with others of their age under the supervision of wise and loving adults. They create plays, they might run wild in the lower caverns for a few days, scream and holler and let out their energy positively. They grow into whole adults–no alcoholism or other addictions.

JC: Is there any insanity on Telos?

JC: How about poverty?

SD: No, everyone has what they need and want.

SD: Homes are based on sacred geometries, mostly spheres. Our public buildings look a lot like those of ancient Greece.

JC: Do you have electricity and appliances like we do?

SD: We’ve developed machinery to tap energy from the ethers, so we don’t need electricity. Some appliances are similar to yours, but more advanced. We even have a replicator, as on your TV show Star Trek, but most of the time people like to cook for themselves.