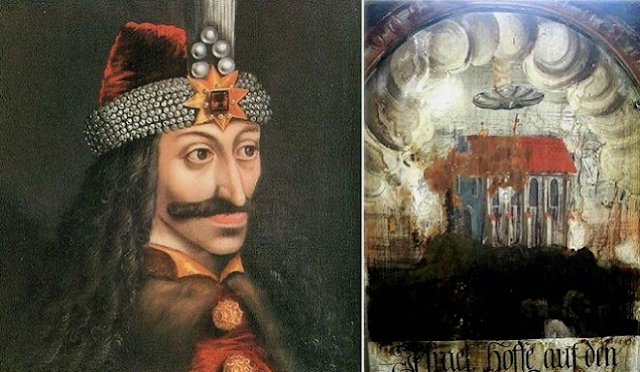 A UFO appears to hover over a building that may be connected to the real-life Dracula in a recently uncovered painting from the town of Sighisoara, Romania. A photo of the mysterious painting that appears on the wall of a 700-year-old monastery was snapped this summer by tourist Catalina Borta, who sent it to a prominent UFO research group for evaluation.

The bizarre painting shows what appears to be a church — perhaps the same one where the painting was found — seemingly engulfed in flames. Over the church, a large, floating disc hovers, sending a column of smoke billowing toward the sky above.

The town of Sighisoara is believed to be where Vlad Tepes, the notorious “Vlad the Impaler,” also known as Vlad III Dracula, was born in 1431 — not long after the monastery where the painting appears was constructed.

The name “Vlad III Dracula” translates as “Vlad III, Son of the Dragon. The nickname “Impaler,” not imposed on Vlad Tepes until after his death sometime around 1477, came from the bloodthirsty warlord’s practice of spiking the bodies of his enemies on sharpened poles and leaving them on public display as show of power.

Vlad III Dracula was Irish author Bram Stoker’s inspiration for the vampire Count Dracula in the 1897 novel Dracula in which the now-legendary fictional villain first appeared.

“But why would a painting that may have been created in the real Dracula’s lifetime, in his own hometown, depict what appears to be a flying disc-shaped craft, of the type described today as a UFO?”

Acording to Gilli Schechter and Hannan Sabat of the Israel-based Extraterrestrials and UFO Research Association, the painting in the Church of the Dominican Monastery in Sighisoara depicts a flying disc that appears very similar to other UFO type objects scattered through artworks of medieval times.

They cite, in particular, an illustration from a book called the Prodigiorum Liber, an account of an ancient Roman battle during which a mysterious round object appeared in the sky. The flying disc in the illustration looks very similar to the UFO in the Sighisoara church painting.

Similar discs have also appeared on French coins from the 17th century. But UFO expert Marc Dantonio says that the images on those coins are actually intended to depict military shields. The shields were supposed to symbolize the military might of the French king Louis XIV.

Experts have had some trouble dating the strange UFO painting from the birthplace of Vlad Dracula. The inscription below the painting is a Biblical quotation in German, suggesting that the painting was created no earlier than 1523, the first year that the Bible was translated into German.

Does the UFO painting date from the lifetime of the Vlad Dracula or a nearly a century later? Is the painting supposed to symbolize the military power of Dracula? Or is there some connection between the warlord who became a fictional vampire and extraterrestrials?

UFO experts remain baffled as they wait for more information about the startling painting from the home of Dracula.