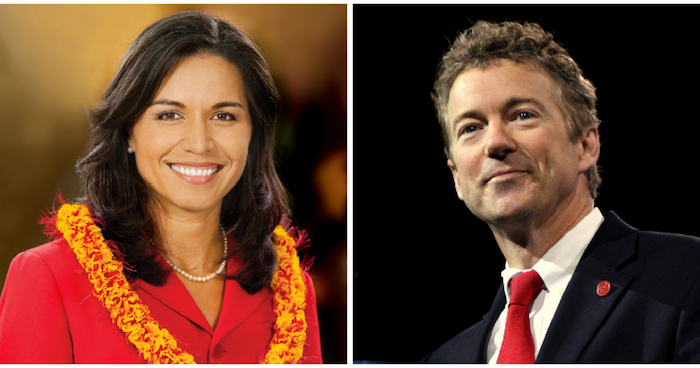 This week, U.S. Senator Rand Paul introduced the Stop Arming Terrorists Act (S. 532) to prevent American taxpayers’ money from being used to directly or indirectly support armed militants who are allied with or often working under the command of al-Qaeda, ISIS, or other terrorist groups. The legislation serves as a companion bill to H.R. 608, which Representative Tulsi Gabbard (HI-2) reintroduced in January.

“One of the unintended consequences of nation-building and open-ended intervention is American funds and weapons benefiting those who hate us,” said Dr. Paul. “This legislation will strengthen our foreign policy, enhance our national security, and safeguard our resources.”

“For years, the U.S. government has been supporting armed militant groups working directly with and often under the command of terrorist groups like ISIS and al-Qaeda in their fight to overthrow the Syrian government. Rather than spending trillions of dollars on regime change wars in the Middle East, we should be focused on defeating terrorist groups like ISIS and al-Qaeda, and using our resources to invest in rebuilding our communities here at home,” said Rep. Gabbard. “The fact that American taxpayer dollars are being used to strengthen the very terrorist groups we should be focused on defeating should alarm every Member of Congress and every American. We call on our colleagues and the Administration to join us in passing this legislation.”

​You can read S. 532, the Stop Arming Terrorists Act, HERE, and you can find more information below: