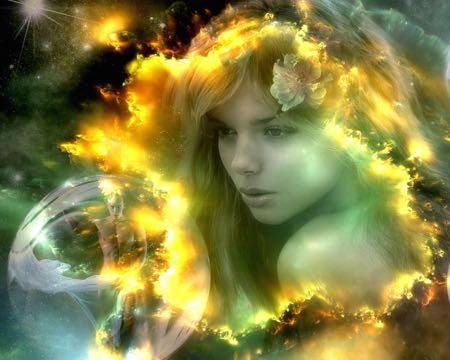 Change is accelerating now in this Great 5D Shift. The 3D world is in terminal decline due to accelerating climate change and environmental destruction, but we don’t have to be contracted by that. It’s vitally important to let go of attachment to needing things to look and be a certain way. You have to be inspired to transcend the physical: find the beauty in the reflection out there where you can, but always feel the expansion into Fifth Density on the inside – paradise is to be found within you. This piece of essential shift philosophy was doubly important for me recently, in a layover on Hawaii, during the current Openhand World Tour, where I experienced close encounters with subliminal expectation…

Cause and effect: putting out respectful vibes

On the map, Ohau is a relatively small island, I was fairly bowled over therefore, by the 8 lane highway around Honolulu – if the sun hadn’t been shining, I could have easily been winding my way around London’s slow moving parking lot – the M25. “You should catch some peaceful rays on Waikiki beach”, I was reliably informed. Except as I discovered, Waikiki is wall to wall hotels, shopping malls, limos and high fashion. Wow, is this what people really rave for? Why on earth do they have to stick all this on a subtropical island that clearly once had pristine beauty? It was my first encounter there with subliminal expectation. But surprisingly, unexpectedly, the sweet little park with its mystical bird life, next to the beach, was devoid of voracious two-legged raptors. It was the perfect place for some heavenly meditation. Whatever the chaos out there, you’re bound to find a reflection of what’s in your heart…”seek and ye shall find!”


Nevertheless, my soul still yearned for some physical expansive openness. So not to be easily put off, surely I’d experience some slice of paradise up on the sparsely populated north west coast? So I hired a small compact car, as eco-friendly as possible, (to replace the gas-guzzling mustang the hire company originally palmed me off with) and took off in search of some expansive peace and quiet. Yes, I did find some beautiful golden beaches, but I did have to fight my way past wasteful rubbish, mountains of black plastic bags and miscellaneous junk, which people had disrespectfully discarded around many of them. It was a great reminder in this Great Shift, to look and feel through the physical in order to transcend it.

Prior to my trip, I had wondered about the karma of the not-to-be-mentioned big “F” word “Fukushima”, on such pristine pacific islands… “How sad, what a tragic shame”, a fair few people had shared privately to me. Here on the beach, the law of cause and effect was a clear as the conspicuous consumerism: if you put sh** out, then sh** is what you get back!
(just as when you put out respectful vibes, that’s what you draw to you.)

Maintaining a good sense of humour

What about some conscious eating? Surely I could expect plenty of that on such a high vibe island? Hmmm, unfortunately, as we know, westernation has a long reach, and there was little to find beyond the “eat-all-you-can-for-$9.99”. But the pull did direct me to a privately owned Chinese eatery, the incredibly hospitable owner of which, was prepared to forgo the ubiquitous meat dishes, MSG and sugared dressings to provide some real vegan food, lightly steamed, and all just for $7. A great reminder, even when you’re in the junk food jungle, if you’re prepared to stay open and look, the light will still shine through the trees. Keep penetrating guys!

Right about now, I did feel the need to get away from it all and experience some real nature. “Head up to the north west tip of the island, to the bird sanctuary, where there are no roads – you’ll have to hike in”. Bird sanctuary, now you’re chirping my language – “You’ll see loads out there” I could confidently expect (there goes that “e” word again!).

So I hiked up the coast, along some beautiful blue oceans, with joyful expectations (oopps!) of encountering some truly paradisiacal creatures. Duhh – should have felt it coming – subconscious expectation at it again! As I entered the reserve, things did look up momentarily – a majestic albatross flew directly over my head. Except it did synchronistically spike for me that it was actually LEAVING the reservation, and after two hours of exploration there, was the singular bird I actually saw. Clearly, as on the coasts of California now, the unmentioned big “F” is having its undeniably disastrous effect. After the sadness had subsided, I did manage an ironic smile to my self though, as it reminded me of that immortal Monty Python “Albatross” cinema joke… 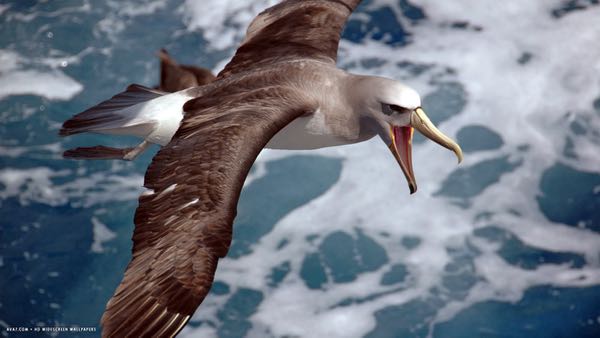 It’s intermission time and a guy is walking round serving ice-cream.
“Albatross”, “Albatross”
“What flavour is it?” asks an interested consumer.
“What flavour? It’s albatross flavour – it’s a fu**ing sea bird isn’t it!”It’s a great reminder in this Great 5D Shift, no matter how challenging you may be finding things out there in the physical, always, but always, maintain a healthy sense of humour. If you find that tough, work to remind yourself that in a universe of constant change, change is the only constant.

Feel the feedback loop, connect the energy inside

On the way back from the bird sanctuary I was on whale watch. I’d been told to “expect” to see plenty of breaching beauties up this part of the island (oh dear, not that pesky “e” word again). Nope, I didn’t see one. But when directed by the flow to a particular place at sunset – I arrived just at the right moment to see a Beautiful Blue, leap right out of the water in spectacular splendour. Incredible. Miraculous. What need has anyone of that other big “e” – wide screen entertainment? And it was another great reminder: always, but always, follow the pull.

So what about the dolphins – surely I’d see loads of those? “Go down to the big powerplant”, I was told, which some bright spark had decided to position right next to the beach: “it’s shallow there, you’ll see them by the dozen”. But nope, no dolphins. At least they’ve got some sense, I was thinking, as I could feel their humorous souls already beginning the ascent into 5D – and who can blame them!

But with no physical dolphins to cheer my heart, I felt to find a stretch where human surfers would be out in numbers. And as I discovered, apparently expectation does still sometimes work – for there they were, plenty of them, majestically hanging ten on the abundant rollers, apparently oblivious to the potential effects of the big “F” – “Well you’ve got to go some way”, I could hear them saying. Indeed we all have!

And so they inspired me to surf the inner planes, deeper and deeper, catching my own waves of higher consciousness using the Openhand Breakthrough Meditation. Soon enough, I was floating on waves of sheer bliss.

The longevity and resilience of aligned life

So with expectation by now long dead and buried, it turned out to be a great trip. Plenty of meditation, plenty of signs and synchronicity, all reminding me that at this crucial time in the Great Shift, you have to ride the inner waves constantly and take beauty wherever you can find it – a small flower, a charismatic tree, the sun shining through silver lined clouds. Find it always in the apparently ordinary, and sure enough, from time to time, the extraordinary will wash up on your shore. And so it was on the very final day, where the physically miraculous came up to greet me. 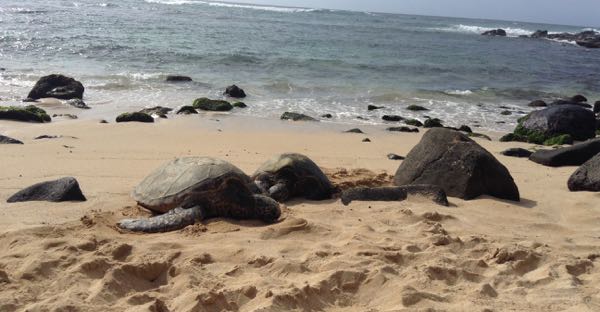 It was about the end of the day and time to return, when I received a strong and unmistakable pull to park the car and go down onto the beach, right where I was. I never ignore these things, I’ve had too many incredible miracles happen when I’ve least “expected” them. And there on the sand in front of me, right where I’d pulled up the car, I could hardly believe my wide open eyes – two majestic giant sea turtles resting on the beach. They were utterly incredible – in a synthetic physical reality, a powerful reminder of the incredibly authentic, real and ancient. The contrast could hardly have been more stark. I was besides myself with incredible joy.

I sat and meditated with them for about 2hrs. These were migrating turtles, and I could literally see visualisations from the thousands of underwater miles they’d covered to be there. What an incredible evolution – they don’t need cars, planes or buses, they just swim! I asked them how they felt and what they might want to show me. The larger, and elder, showed me first her patience for humanity, despite the deep scars on her shell caused in some boating accident. Although the gouges were deep, she’d recovered well, and soldiered on with her cause. I could also feel the buzzing in her head – that looming big “F” word again – but I could also feel the pounding of a still powerful heart, and the sense that no matter how tough it gets, she wouldn’t give up. Just feeling all the trials and tribulations she’d endured on her journeying, was incredible testament to the longevity and resilience of aligned life.

Getting close to sunset, I struggled to pull myself away, but was greatly buoyed by the encounter. It made all of the challenge of being here completely worthwhile.

Turtle Medicine carries ascending souls into the higher planes, and I had the sense from her, that although getting weary like Gaia, she was hanging on just as long as she could. But there isn’t much time left – the window will only be open for so long. Time to get on board this Great 5D Shift, while its still possible. She left me with this parting message for humanity…

“The Great Shift is in full swing now. Find paradise within, then ride the waves into the Higher Paradigm, where you’ll find renewed golden beaches and clear blue oceans. Go well my earth brothers and sisters. See you along the flow.”

So I did find myself a little slice of physical paradise. For that I most grateful. But I’m also greatly reminded that this physical world is rapidly (“rapid” in cosmic terms) drawing to a close now, and the bountiful experiences of a renewed world, pristine in all her former glory, are to be found in the space between the spaces, in the realigning flow, and to feel the upliftment from that. This is the message I got for everyone in the ascending group from those two stunning turtles.
Namaste – see you down the flow.
Open
PS – if you feel the pull to Hawaii, please don’t let my account put you off. I know there are still some stunning islands like Maui and Kuai. Just don’t let expectation get the better of you!

About Openhand
Openhand is a unique approach to spiritual evolution: integrating enlightened wisdom of spiritual masters through the ages, it is a way of tapping into the Benevolent Guiding Consciousness of the Universe and aligning with it in your life. It helps you unveil your True Self, remove karmic blockages and unfold your Divine Destiny. It leads to authentic, resilient and truly successful living.
Join us…Openhandweb, Openhand fb, Openhand TV