We are about to release the Part 2 update that will cover quite a lot of exciting news from Antarctica. Amazing… http://fb.me/1s0gbeBcL

Buzz Aldrin Warns “We Are All In Danger. It Is Evil Itself”

Buzz Aldrin has tweeted an ominous warning on Twitter this week, claiming that “we are all in danger. It is evil itself,” accompanied by a picture of a pyramid at the South Pole.

Astronaut Buzz Aldrin Tweets “We are all in Danger. It is evil itself”

United States Astronaut Buzz Aldrin Tweeted an ominous message to the world using his official, verified Twitter Account, then strangely deleted the tweet later.  His words: “We are all in danger.  It is evil itself.” and showed a photograph of a pyramid located at the South Pole as show here. 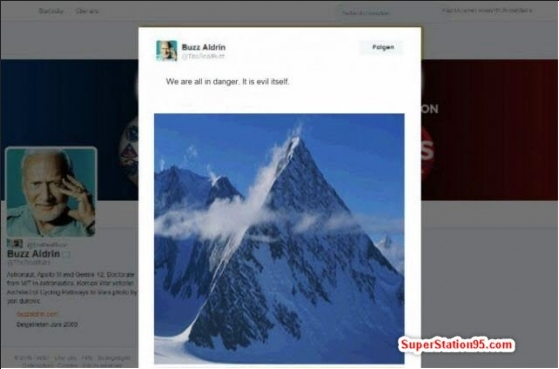 Mr. Aldrin seems to be referring to this object, as seen in an serial photo from Google Earth:

The “pyramid is located not far from the United Kingdom’s “Princess Elisabeth Station” at the South Pole, as shown in this photo, below: As has been reported by worldwide media, US Secretary of State John Kerry recently traveled to the South Pole, allegedly to become better informed about “Climate Change.”  Kerry was the highest ranking US government official ever to visit the South Pole, and his visit struck many as unusual.  Few saw any purpose whatsoever to sending America’s top Diplomat to the farthest reaches of the earth to see . . . ice.

Now, with Buzz Aldrin’s tweet, and its strange deletion, folks are wondering if sending America’s top Diplomat to no-man’s land, perhaps had something to do with Diplomacy after all.  Is there some entity there with which we need Diplomatic contact?

If so, why did Buzz Aldrin warn that we are all in danger?  Why did he call it “Evil itself?”
If there is something at the South Pole which may be “evil itself” then let humanity know about it so we can all decide upon a course of action to deal with it; even if the decision is to leave it be.  But since a trusted and respected Astronaut has told us “We’re all in danger” then whatever is there, has just become ALL of our business to decide what to do.

More on this developing story as information becomes available.