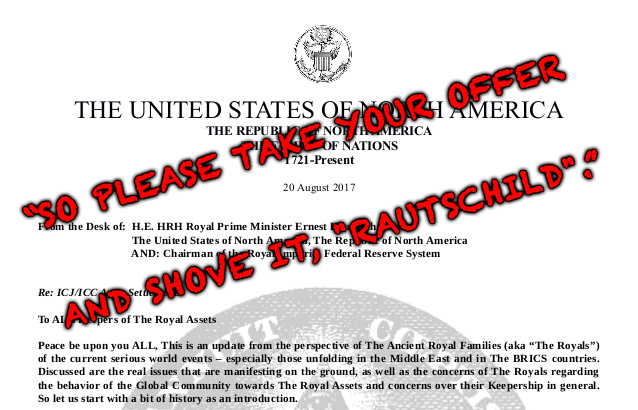 (Stillness in the Storm Editor) Several days ago, we posted an article on this site, discussing a man with the name Ernest Rauthschild, who published a document effectively warning the Cabal to stop in their insidious actions. Rauthschild claimed to be a representative of a group called The Royals, directing his statements to a group called The Keepers. Needless to say, the document was hotly contested by many, including myself. The claims made within the document can’t be confirmed. Who is this Rauthschild? What valid authority does he have—if any? And why would The Keepers, or whoever these people are, listen to him? Anna von Reitz offers some colorful commentary about this situation below.

As I stated in the commentary section of the article, there are many valid ideas referenced by Rauthchild, which shouldn’t be lumped into the category of “BS.”

Similarly, in discerning claims, the temptation is to paint everything within a claim as bogus or untrue, when the overall supposition is determined to be invalid. But each point needs to be judged on its merits alone, in order to properly know, with certainty, specificity, and particularity, that it is untrue or true.

Keeping this separating the wheat from the chaff concept in mind, consider how von Reitz phrases her response. She cites a claim made by Rauthschild, and then she provides an argument to support her counterclaim.

Also, notice that she implicitly validates the “Mandate From Heaven” concept, by explicitly referencing “the Living God.” The concept of a mandate from heaven is an ecclesiastical reference—a formal body of people that recognize the divine will of the Creator, and choose to act as agents of the divine here on earth for the benefit of the divine and the people. The living God phrase relates to this because, when an individual has taken the time to do their inner-work, learn the law and seek the will of the divine, they become God conscious, capable of representing the interests of the divine here on earth.

Thus, when such a God-minded person recognizes their responsibility to the divine, they acknowledge the “mandate from heaven, becoming the living God here on earth. We’re each capable of this level of attainment, which if done, would very quickly help restore order to our world plagued by chaos.

So while this Rauthschild character might be some half-insane fraudster, as von Reitz suggests, the ideas he shares are not necessarily invalid.

This serves as an example and an exercise of discernment.

True discernment—the ability to determine if something is true or not, and why—is not the prejudicial rejection of a claim or body of information. Discernment does not mean throwing everything within an assertion into the garbage because one aspect of it was determined to be untrue. All points need to be evaluated independently, no short cuts can be taken.

Discernment requires precise detailed knowledge of all the issues at hand insofar as judging the veracity of a claim. The end result of discernment is a high-resolution recognition of what was false and what was also true.

Von Reitz clearly has a working knowledge of the philosophy of law and how concepts like authority, jurisdiction, and valid claims work, exemplified by her citations regarding what her group has done to garner valid authority in law.

You have issued your “orders” and we are now issuing ours— cease and desist trying to delude or defraud anyone on this planet.

The entire idea that you own the “title” to anything, much less anyone, is preposterous and tied up in conventions of fictional trust law which do not apply to any actual living being or thing.

The words that you and your brethren all need to thoroughly understand are: we do not consent, and furthermore, we object.

The actual Donor of the “Trust Assets”, the Living God, is here, present, and aware of your lies and the lies of all those that are attempting to gain power and wealth for themselves at the expense of all the other royal progeny.

The BRICS nations are no less “royal” than any others, and we note that you are infringing on our copyright to our unincorporated business name, United States of America, to name your damnable commercial corporation after us and thereby pretend that it has something to do with us and our assets.

We are here to tell you that we are not deceived and not amused and not putting up with constructive fraud and flannel-mouthing anymore. We have published our “non-assumpsit” of all and any debts of incorporated entities and we don’t care if you pretend to hold a charter from the Grand Star Council of the Sun.

All we are going to do is give you a free one-way ticket back whence you’ve come, along with the horse that brought you, and all those other fictional “entities” that have gobbed up around you like so many spiders in a vase.

We also note that you have used a variation of the name “Rothschild” in an attempt to associate yourself with the banking family and so far as our information goes, you are an American Indian trying to ride on more coat-tails at once than a very fat man on a bus in India.

If there are any “Galactic Keepers of the Earth” they are only the Angels that guard me and the Holy Spirit that guides me and the Living God that gives me breath, and I am sick of all this horse hooey. I well and truly am fed up.

Our Father gave us dominion over the Earth, and we’ve made a glorious, big, fat, ignorant mess of it. People like you and their CORPORATIONS have damn near been the death of life on this planet. Liars. Thieves. Charlatans. Gamblers, Sinners. Parasites. Aggrandizers. And in the end, Fools.

The rest of us, those that really do care and that are peaceful and that don’t want anything to do with any filthy CORPORATIONS and “power matrixes” and imaginary Galactic Councils (which have failed to do anything good for this planet in 60 millennia)— those of us who don’t believe in the illusions of money and who invite you to eat your gold and your paper, too—- are the actual, factual Guardians of this planet and the people on it. Not you.

So now that we’ve got that straightened out and in full view of the fact that I have been doing your supposed job for the last forty years— unpaid, now comes the reckoning of the Living God, the one with two eyes, not one—- who will pay you and all the other trust-breakers and cheats back according to your true intentions and your works and your words.

I tell you: The only sacrifice has been paid and there will be no more.

I am looking forward to the morning when I wake up and all of you are gone, leaving nothing behind but a bad smell and a dust devil and a peculiar color of light as your memorial.

Anna Maria Wilhelmina Hanna Sophia Riezinger-von Reitzensten von Lettow-Vorbeck —- and feel free to stuff that in your pipe and smoke it.

PS — We are not accepting any incorporated status and do not seek or need any limited liability “coverage” as we have already established our Private Registered Indemnity Bond and provided a Payment Bond Guarantee already lodged with the Vatican Chancery Court. So please take your offer and shove it, “Rautschild”.