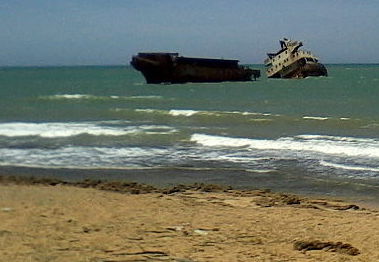 In May, I wrote an article titled “The OPEC Epoch is Over,” which pronounced OPEC officially dead and predicted oil prices would plunge again. So far, I’ve been wrong about a second perilous plunge in oil prices. However, even as market heavyweights herald this week’s OPEC meeting for pumping up oil prices, a few voices join this lightweight in saying this meeting proves OPEC is over.

The Financial Times says, “Oil Output-Cut Pact Spells ‘the Beginning of the End’ for OPEC.”

The recent OPEC oil output-cut deal “will come to symbolize the passing of one of the world’s most powerful cartels,” the Financial Times predicts…. “After 50 years in control of the oil price, OPEC has submitted to the economic power of a much-changed global market. The deal represents the recognition of their own impotence by a group of countries that once held unchallenged power,” writes Nick Butler, a visiting professor and chair of the Kings Policy Institute, London. (Newsmax)

In other words, OPEC has given up on the Saudi brainstorm of flushing the US out of the oil export market. Contrary to the Saudis’ expectations, the US oil industry did not fold, though it buckled a bit. Saudi Arabia was forced to fold first.

The US industry trimmed a lot around the edges, with several companies failing while others became more economical and survived. Necessity once again became the mother of invention. Fracking operations slowed but kept going. Production has been capped in ways that can come quickly back on line if prices start to rise, but that will be an equilibrium force that pushes back down on prices as soon as they start to look profitable.

The same article points out that OPEC’s tightening of production (particularly Saudi and Russian production) is not going to drive the price of oil back up because the oil glut continues to grow and will stay on that path even at the newly agreed production levels:

“This is not a deal capable of lifting prices to the level of $60 or $70 a barrel that is supposed to be OPEC’s target,” Butler wrote for the FT…. “There is a surge of production coming in the next 12 months from new fields in countries outside Opec, such as Brazil, Canada and Kazakhstan. It is perfectly possible that total global production — from Opec and non-Opec states combined — will be higher next year than in 2016.”

Gasoline oversupply is at its worst all year. (See “Ahead Of OPEC’s Meeting, API Inventory Report Shows Major Crude Build At Cushing.”) Apparently that news is earthshaking because Cushing, Oklahoma, just had one of its largest oil-related earthquakes. (The USGS has determined that the huge increase in the number of earthquakes in Oklahoma is definitely caused by fracking.) Of course, if these earthquakes around Oklahoma’s oil hub get any worse, they have the potential of cutting off a lot of US oil supply by damaging oil infrastructure and creating a lot more public opposition to fracking.

Cost-saving technologies invented out of the need to survive the Saudi crush on oil prices will also now spread around the world to increase cheaper production everywhere. At the same time, the OPEC cuts won’t amount to much because one of the main producers — Russia — saw a huge increase in production in November and is using its November production as the baseline for its cuts. That means its cuts will really only hold it close to the level it was at earlier in the year when prices crashed. Another large producer Iran, which had been holding out on a deal, finally won against Saudi Arabia, as the new deal does not require Iran to make any production cuts.

The following chart reveals why the agreement that was finally reached after a year of talk no longer means anything at all: 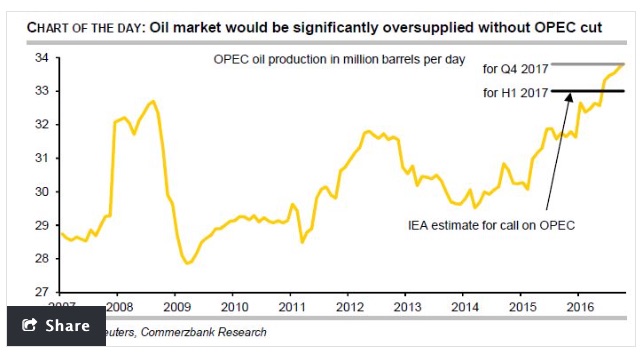 As you can see, despite the talk all year of cutting production, OPEC actually increased production throughout the last half of 2016 to where the present agreed cuts to 32.5 million barrels a day will only put OPEC nations back to where they were earlier in the year when oil prices were crashing.

While OPEC’s production increased throughout all the talk about talks with all of the corresponding failed meetings, US production decreased. However, the US oil rig count has now climbed to a ten-month high, which means pressure is building for future production. With Trump planning to do everything he can to aid US production, I think it is a near certainty that US production wills start to rise, pushing down on prices again.

On the positive side, the fact that technology has brought down production costs, means the US companies that have weathered through won’t be as hurt by lower prices, and that means their banks will not be as hurt by lower prices. U.S. banks have also stockpiled $6 billion in cash during the time in which prices were back up to the high forties and low fifties, set aside to cover future energy losses. By the time the next drop in prices occurs, it may not be as damaging as the previous plunge.

So, there you have it. The oil market got the big news it was hoping for all year; but, for so much pent-up hope, it didn’t bring the gusher of price increases that producers hoped for. As initial relief wears off, investors will see there’s not much good news in the pipeline for those needing higher prices: The OPEC cut was minute to the point of being silly; the flow of oil from elsewhere is likely to increase, and gasoline is oversupplied as we go into winter when less is needed. So, gas prices are likely to fall (maybe even plunge), meaning profits for both oil producers and refiners (often one and the same) are likely to be lean to nonexistent awhile longer.

For some it was surprising that this long-hoped-for deal did nothing for the US stock market. One analyst sees that as an ominous sign of weakness in the market’s post-election rally:

The OPEC deal news on Wednesday should have been more than enough to unleash a flood of buying, according to Ziedins. “If the market was a coiled spring ready to explode higher, this would have triggered that move,” he wrote. “Instead we hit our head on the ceiling and fell into a tailspin…. There are few things more ominous than a market that cannot rally on good news because it tells us we are running out of new buyers.” (MarketWatch)