In 2016, experts uncovered 13 footprints which they believe date back more than 3.6 million years. The enigmatic footprints were discovered in modern-day Tanzania and were preserved for millions of years thanks to a region which was at that time covered with wet volcanic ash. 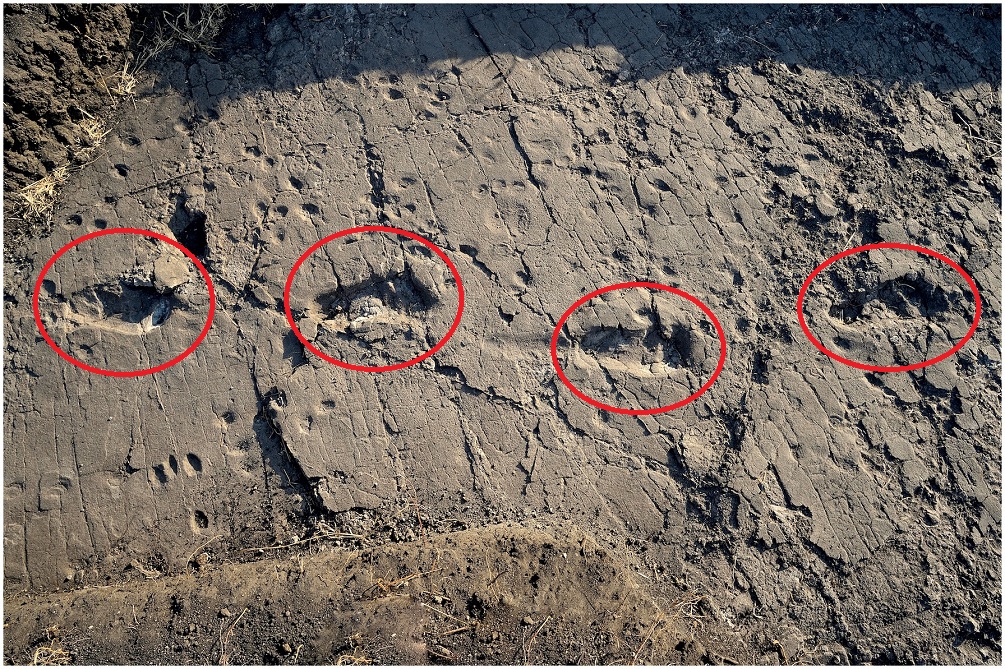 The Southern part of the hominin trackway in test-pit L8. Image Credit.

Discovered in Tanzania, the footprints discovered by experts belonged to a group of early humans who inhabited modern-day Tanzania.

Scientists believe the enigmatic set of footprints were left behind by our ancient relatives—most likely Australopithecus afarensis—as they walked across a region covered with wet volcanic ash.
The set of 13 footprints were discovered near Laetoli, Tanzania by scientists from Sapienza University in Rome.

Scientists suggest the footprints belonged to around five members of early humans who may have had a gorilla-like social arrangement where one dominant male mated with several females.
Scientists say that ‘a man accompanied by around four women is believed to have walked in the region at least 30 meters over the volcanic ash that later hardened into rock, leaving behind fascinating evidence of our ancestors in Africa.

“The shape of the feet, along with the length and configuration of the toes, show that the Laetoli Footprints were made by an early human, and the only known early human in the region at that time was Au. afarensis. In fact, fossils of Au. afarensis were found nearby to the footprints and in the same sediment layer, telling scientists that Au. afarensis was in the area at the same time the footprints were left,” suggests an article written by the Smithsonian National Museum of Natural History.

Colour renders heights as in the color bar. The empty circles indicate the position of the targets of the 3D-imaging control point system. Image Credit.

Giorgio Manzi, one of the scientists who participated in the study said that “This novel evidence, taken as a whole with the previous findings, portrays several early hominids moving as a group through the landscape following a volcanic eruption and subsequent rainfall. But there is more. The footprints of one of the new individuals are astonishingly larger than anyone else’s in the group, suggesting that he was a large male member of the species.”

Scientists indicate that the Tanzanian tracks are the oldest evidence of the existence of a species named Australopithecus afarensis, a forerunner to Neanderthal humans.

And while the discovery of the footprints itself is a major scientific find, experts say that that the footprints show how a 2003 study led by researchers from Penn State University—suggesting Australopithecus afarensis only had one sexual partner is wrong.

Marco Cherin, who also worked on the study, said:

“A tentative conclusion is that the group consisted of one male, two or three females, and one or two juveniles, which leads us to believe that the male — and therefore other males in the species — had more than one female mate.”